If you enjoy queuing then don’t miss Open House London. You can queue all over London, no questions asked, completely free.

I’ve lived in England long enough to know that even on the sunniest of days you should always a take a coat. Even so, on Saturday I looked out of the window and deemed it a no-coater. I had only been outside a few minutes when I realised my mistake, but those minutes had taken me several metres from home and I didn’t have time to turn round. Owing to a disagreement with the alarm clock I was cutting it fine to arrive at Target One before it opened.

Open House London is a weekend when the public are given access to buildings across the capital. I thought I’d start with a big hitter, the sort of place it’s hard to get into normally, so Target One was the Foreign and Commonwealth Office. I headed towards Westminster and examined the Open House London guide as the tube swished me under London. Over 800 properties were open for viewing over the weekend so you can’t visit them all.  I suppose you could, but given a standard 8 hour day you would have only 1.2 minutes at each property. In my opinion that’s not long enough to properly appreciate the architecture.

Instead of arriving at Westminster tube station with hours to spare I had nine minutes. ‘At Waterloo there is no lift service,’ a woman announced over the tannoy as I climbed the escalators. The London Underground service announcements are very informative, although I felt she didn’t have to add ‘This is due to a faulty lift.’

I walked up onto Whitehall. There was no immediate sign of a queue to the Foreign Office, but that was because it went down one side of King Charles Street and back up the other. I wasn’t the only person starting the day with a trip around the Foreign and Commonwealth Office. 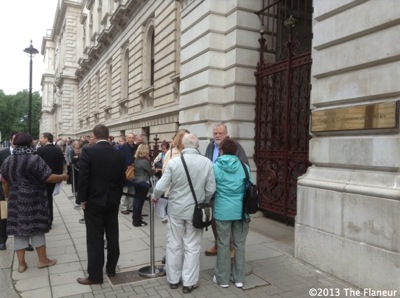 I joined the queue by the goods entrance of H M Treasury, where raw inflation figures are taken in before being massaged and adjusted and reappearing at the front door in a blaze of publicity.

A grey-haired volunteer in an Open House London top approached two old ladies in front of me in the queue. A conversation started that I hoped they wouldn’t repeat with the security gentlemen at the door.

‘Have you got a gun?’ Flowery Blouse asked Green Coat (I could only see their backs).

‘She hasn’t brought a gun today,’ Flowery blouse told the volunteer. He nodded and said,

‘They’re only worried about machine guns, pistols are OK.’

Eventually I was inside. The Foreign Office has long corridors with big oak doors and feels like a Victorian asylum with an unusually large number of recycling bins. It has institutional signs on the TVs telling people that they mustn’t be moved and who to contact if they want to book a TV. ‘Do not place anything on this piano’, says a sign placed on a piano. You feel as though nurses will dash out from side-rooms, pushing injured fighter pilots on trolleys. There’s even a small Costa Coffee, where you can buy a sandwich before visiting-time begins. 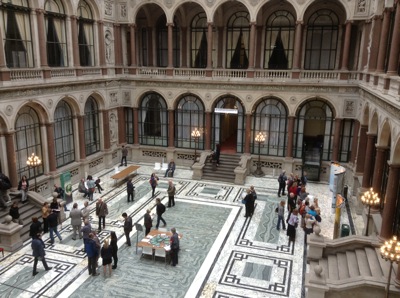 Designed as ‘a kind of national palace or drawing room for the nation’, the public rooms are impressive. And they’ve got great names. No boring sitting room/kitchen/bedroom appellations for the Foreign Office. There is the Entente Cordiale room, Dunbar Court, the Muses’ Staircase. Full length portraits hang on the walls, gilded walls surround huge tables. In the India Office Council Chamber a diplomat was talking about her job. ‘At the weekend we only answer questions like, I’m stranded, I’ve been robbed, I’ve got no clothes‘, she explained.

It is only the showrooms that were accessible. Through a glass panel next to one door I glimpsed an office where the real work is done. There was much less gilding and marble and paintings. And a lot more beige. I do declare we’re being given the wrong impression of what most of the FCO is really like.

At 11:15 I went round to Portcullis House, the newest building on the Parliamentary estate, an overflow of offices and meeting rooms from the main House. With a 300 person capacity the queuing was relatively slight and I was soon walking through security in the no photography allowed building.

I walked over to an exhibition entitled The Day Parliament Burned Down,  a series of information signs and paintings on the left hand wall, opposite The Debate cafeteria. (Gourmet hot dog, anyone? £4 including two sides). It was busy, and you had to queue to read the signs and look at the pictures. Nothing strange about that, it is often the case when you visit a popular art exhibition. At the Tate or the Royal Academy, it’s not a problem waiting for the person in front of you to read the sign or look at the picture. It doesn’t affect your experience of the show.

That wasn’t the case here, where the man next to me in the queue of art lovers was a fully armed policeman. He’d got every right to read the signs or look at the pictures of course, but it is hard to concentrate on Georgian Conflagrations and the Saving of Westminster Hall when the view just slightly to the left is a loaded machine gun. The policeman’s trigger finger lay along the finger guard. He also had a pistol on his right hip, and in case that wasn’t enough, another on his left thigh. This was a man with more weapons than hands. A friend of his walked over. I am not sure what the optimal conditions for looking at art are, but they’re not being followed round an exhibition by two tooled up policeman.

Instead I went upstairs, where I intended to look at the portraits of recent political figures. At the top of the stairs a friendly guide told me there was a talk starting very soon in the Grimond room about the work of Select Committees. When I see that written down I wonder what I was thinking, but she made it sound like the must-see event of the day. I assumed it would last ten minutes, at the most.

It wasn’t until I was in the Grimond room that I realised it lasted an hour.

A slide projected on the wall announced that we would learn about the workings of the Transport Select Committee. There were as many people in the room as you might expect for such a talk.

I started looking at the door. It was big, wooden, but only a couple of metres away. I felt myself strangely drawn towards it. Suddenly I was on the other side of it, back in the first-floor corridor around the atrium which functions as an art gallery for recent political portraits. Gerald Scarfe’s distorted caricature of a House of Commons Chamber in 1965 isn’t pretty, but kudos to parliament for hanging it.

By 12:15 I was back outside, where it was colder and greyer – ideal weather for pulling on a coat and being pleased with yourself for having brought it. As I couldn’t do that I headed towards Benjamin Franklin’s house, thinking I would eschew Inigo Jones’ Banqueting House as you can go there any day you like. But as I passed the last remnant of the original Whitehall Palace there was no queue, so I turned in for a quick look at Peter Paul Reubens’ painting. Having commissioned the ceiling it would have been one of King Charles’s last sights as he was led to a balcony on this building to be executed in 1649. 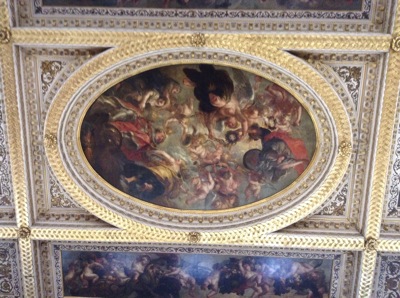 Over the road at Horse Guards the approximate queue time was an hour and a half, so I skipped that and headed to Benjamin Franklin House on Craven Street. Unfortunately there the queue was two hours long. I walked over to Canada House on the other side of Trafalgar Square, but to look around the Canadian High Commission you were supposed to have pre-booked. It was the same story at the Reform Club on Pall Mall.

By now it was raining, but I managed to get into nearby Marlborough House, ex-home of Edward VII and Queen Mary and now headquarters of the Commonwealth Secretariat. Once a month all the High Commissioners in London meet at a huge table that I would have taken a photo of, but photos are not allowed. To be honest if you just imagine a very big table you’ve got the idea. They sit in alphabetical order to remind that are all equal. Happily it is a layout that puts the UK only four seats from the centre…Outside in the garden where photos aren’t banned there is a very rural looking thatched summer house. Hard to believe that is central London. 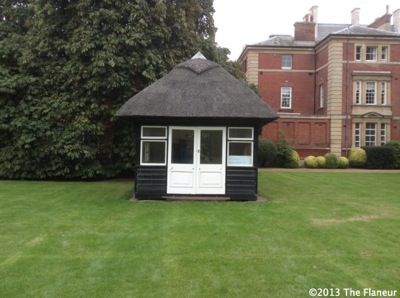 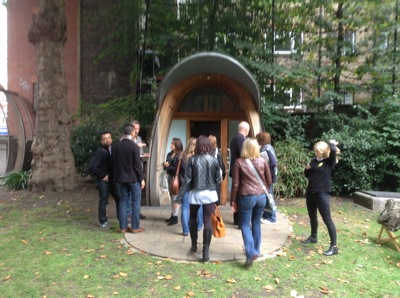 I made it to the Art Loo on Wardour Street. On a different scale to the other buildings I had seen, a public convenience that has been designed as an egg-shaped pod, with cavities in the inner walls to display works of art. It is in the grounds of St Anne’s Church, where the bell tower was also open to the public, though the access is very steep and the queues on the first floor for the final ascent took a while to dissipate.

‘Is it worth it?’ asked the man queuing in front of me. 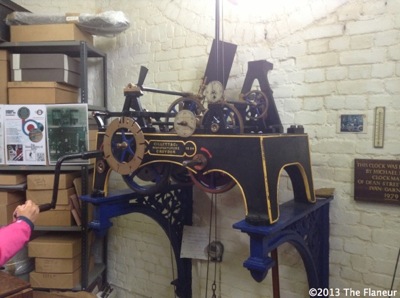 And so there was. Victorian engineering still working today. There was no built in obsolescence in 1850.

If you didn’t go to Open House London 2013, make sure you do next year. It is a great way to see inside buildings that you can’t normally access. But prepare to queue. And take a coat.