The eternal city has more culture, romance and swarthiness than George Clooney and Penelope Cruz’s lovechild draped in Dolce & Gabbana. Even people who haven’t visited know this to be true and, for this reason, it’s deemed the most romantic city in the world. Feared by all ‘blokey-blokes’ as the place most likely to bore a hole in the mind and wallet, leaving both with a wide gaping space of nothingness in the process. But there is so much more to Rome than fashion and sentiment. Her dark history incorporates all that’s been good and evil in mankind. The navel of the world for more than five centuries has bottled up all that passion, debauchery and hedonism and honed it into an exhilarating ride in the 21st century with plenty to appeal to the fair and (infinitely) less fair of sexes. 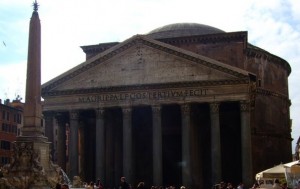 Historically this building’s patronage is unparalleled. Originally built and dedicated by the Emperor Augustus’ top military man Marcus Agrippa. If Augustus was Rome’s greatest emperor then he only got there by the military genius of Agrippa. It was rebuilt by Hadrian – yes the very same one who built that wall spanning the North of England– but he re-dedicated it to Agrippa which is why his name still stands proud above the entrance.

Originally it was built to honour all of the Roman gods with apses for each around the circular wall. It was, however, converted to a Catholic church in the 7th century so it’s been in continuous use for nearly two thousand years – making it one of the oldest churches in Rome – and it remains the world’s largest unreinforced concrete dome to this day. An engineering masterpiece!

The Pantheon is also the final resting place of Raphael. (Feel free to imagine the Ninja Turtle in the tomb – made me smile) The artist was considered the one of the greatest masters of his generation – along with Leonardo and Michelangelo (keep grinning) – and bears the inscription:  “Here lies that famous Raphael by whom Nature feared to be conquered while he lived, and when he was dying, feared herself to die.” An accolade even Chuck Norris could be proud of.

Looking for a taste of the ‘modern’ Rome can be a little tricky when you’re tripping over antiquity wherever you go. Romans are, like all Italians, in love with the aesthetics of the past but they are also obsessed with the finer side of modernity too. For this the best bet is to head to the Testaccio district. In the southern part of the city, easily accessible from the Pyramide Station on the Metro Blue line, lies the bouncing district of nightclubs and bars.

The scene is eclectic. 90’s pop, disco, salsa, trance and live music clutter the warren-like streets of this area of Rome and you’ll be wishing you had booked more nights so as to try and get a taste of it all. If dancing isn’t your scene then you will fit right in with the locals by choosing to sip a cocktail or simply relax in one of the outdoor bars too. Don’t blend in too much though, eyeing up the local ladies will most definitely cut your ‘romantic’ getaway short.

For a good list of bars and their styles see: https://www.ciaorome.com/nightlife.htm

Just off Piazza Navona, in the heart of the city, this rustic little eatery nuzzles quietly into the stream of others touting your business. The reason for its relative silence? Contentment in quality. Just by looking through the window you’ll see locals and tourists mingled among the scattered tables inside – a true sign of good quality. The menu is unpretentious, local and fitting for every taste and budget. In a city renowned for leaving tourists penniless La Ciccia Bomba makes for a welcome haven where you can speak to the helpful waiters and waitresses who will be just as happy to serve you a Margherita pizza as guide you towards the rustic Roman cuisine of which they’re so very proud. One last thing, if you’re not a wine snob, just order the house wine. It’s very local, very strong, delicious and comes in quaint jugs at quaint prices by the litre!

A short saunter from La Ciccia Bomba, Cul de Sac is one of the oldest wine bars in Rome. Outside are a few tables on which you can sip the night away while watching Romans promenade like extras in Roman Holiday. The wine, again, can be under €3 a glass which in this area of Rome is impossibly good value. If you’re palate is a little more discerning, however, the Cul de Sac is classified as an ‘enoteca’ which means its wine list in inexhaustible and the waiters are helpful, refined but still very Italian and, therefore, unpretentious. This little drinking hole really is an excellent place to relax into the warm evening and they even serve food in case you’re a little peckish later on.

Anybody who enjoyed the combination of history and conspiracy of Dan Brown’s famous Angels & Demons will go giddy with delight over the 4 hour guided tour through the city’s Illuminati haunts. Though a little on the expensive side at €56 per person for the group tour you will visit:

All with an English-speaking tour guide to remind you of all those fateful moments in the book/film. Having said that, it doesn’t take a lot of effort to mark them on a map and, book in hand, wow your, now doting, partner with your knowledge of Rome’s darker side. Stop short of making her call you Robert Langdon though, that’s just creepy.

Speaking of her darker side, at a mere €22 per person the 1.5 hour Dark Heart of Rome Tour is a more economic but equally enthralling option. A post-sunset walking tour through the less frequented parts of Rome you’ll come face to face with the long quagmire of Rome’s history through legends and ghost stories as you pad the cobbled stones of the ancients. Truly one not to be missed.

All – in – all the recommendation for Rome is the same as with most cities: research before you get there. In order to make the perfect couple’s getaway you’re going to want to include surprise, enthusiasm and difference. Unlike other cities, if you’re not staying far away from the centre then avoid the Metro at all costs. It’s cheap, reliable and safe but it mostly circles the heart of the city. The centre is around 2.5 miles across, labyrinthine and dripping with things to see and do. Imagine how stupid you’d feel if you spent most of your time watching dark passages whizzing past your window fifty feet below masterpieces?  Research, draw on maps and prepare to wow your better half with your knowledge of what’s soon to be your favourite city. Of this I am certain!