See the world one drawing at a time is the motto of the Urban Sketchers who descended on Covent Garden last weekend for a day of drawing in the city.  Hosted by the Moleskine store and the London Graphic Centre members of the artists collective gave demonstrations and talks about sketching in the urban environment. Moleskine gave out complimentary sketchpads to participants and final works created by the public were exhibited in the London Graphic Centre. 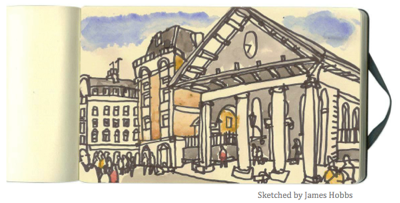 Founded by Seattle artist Gabi Campanario, the Urban Sketching movement has branches around the world. There is an eight point manifesto that Urban Sketchers have to embrace, but this is so broad that it would hard not to stick to it. Any medium, any subject, any ability is allowed, the only clear rule being Draw from life.

In Covent Garden experts like Adebanji Alade and James Hobbs spoke about their work and techniques before taking groups of sketchers into the streets to put graphite on paper.

‘What will you be teaching,’ I asked Alade at the Moleskine store.

‘How to draw anything, anywhere,’ he said, which sounded like a masterclass worth attending. ‘Bold lines first then thinner lines’.

Over at the London Graphic Centre Hobbs gave an introduction to urban sketching, materials and techniques. Emphasising that there is ‘no such thing as wrong when it comes to sketching’ he encouraged everyone to grab a pencil and a piece of paper and get out in the city. He also talked of the strategies necessary for sketching in public, which can include drawing whilst wearing headphones to keep interested chatters at bay, drawing in cafes and drawing in a group.

Over time urban sketching gives you a visual diary and a story of your life. Sketching makes you look at things in a more intense way – you don’t have to draw the big sights, it can be the small nooks of the city that are most interesting.

Whatever you draw, the final step with Urban Sketchers is to share your work online. Flickr, Twitter or Instagram are the preferred means of getting your work out there. The global community is ready with constructive feedback and you can have comments a few seconds after uploading your work. Urban Sketchers is a friendly way to start or continue sketching and you should be able to find a branch of the collective somewhere near where you live.