You can usually trust artists to subvert the mainstream uses of pretty much anything, and social media networks are no exception. Twitter should be particularly open to artistic re-interpretation and has given rise to many artworks that rely entirely on those 140 characters for their existence. Whereas gallery-based work requires that viewers and participants physically approach the work to interact, Twitter has allowed artists to work with information that is nowhere near them. However are the resulting artworks as exciting as they could or should be?  Chalkbot, since appropriated for advertising is one of the most famous creations, using a huge chalk-jet printer to write real-time tweets on the ground. But lots more artistic uses for Twitter have recently appeared. 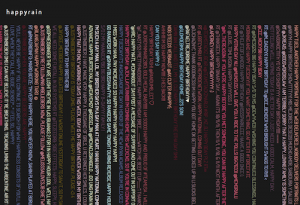 Happyrain is an interactive art project that sits in your browser and rains happy tweets down the screen in waves of random colours. Using real-time tweets that feature positive messages it attempts to reveal a snapshot of the current feelings of ‘the internet.’ This remains though a relatively simplistic mash-up between Twitter and other tech services, and much of the Twitter art that is currently available follows in this vein. Twitter information is used to search another database and produce an art object that relates to both of them. Portwiture and Twitterfountain both do this with Flickr to convert tweets into images. In a similar vein Pa++ern converts Tweets into embroidered T shirt designs.

There seems to be a lack of conceptual ideas involved in Twitter art projects. Rather than Twitter being used in instinctive and conceptual manners, artworks instead rely heavily on new combinations of web-services, or using Tweets to control something else. Transposition rather than creation rules the Twitter art roost.

Hopefully I have just not yet found the art projects that really get involved with the potentialities of Twitter. Until I do I have to conclude that artwise Twitter is a home for dilettantes and the real conceptual uses have so far only been found by those  involved in the Arab Spring and UK riots.

If you know of any Twitter art projects that I should know about and that help prove that Twitter art is alive and kicking please leave a link in the comments.