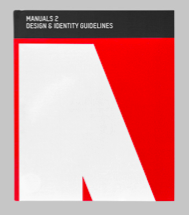 In the 1960s many large corporations hired respected designers to create powerful corporate identities. They also recognised the need for these identities to be controlled and managed with precision – often on a global scale. This led to the production of lavish, often hefty manuals, providing detailed instructions on the use of logos, colour palettes and typographical formats across a vast array of platforms and surfaces – stationery, literature and architecture.

In today’s multi-media digital landscape, designers and, increasingly, non-designers rely on digital templates to implement brand identities. Fast, accurate and easily updatable, these digital manuals are now obligatory. But in the eyes of many, we have lost something. There is a growing nostalgia for lovingly produced printed standards manuals, many of which have had to be rescued from locked cupboards and forgotten nooks and crannies.

The book comes with a substantial essay by design historian Roger Remington and also included are in-depth interviews with Michael Burke, Sean Wolcott, Liza Enebeis and John Bateson – all experts in the field of identity design.