Sometimes I think it’s odd that we have to eat everyday. Once a week would be more manageable, but with four square meals needed daily it is sometimes hard to keep up the enthusiasm for cooking. Some days you can’t quite be bothered, others there’s nothing edible in the house except for some curry paste and a box of Mr Kiplings’ finest. Thankfully there is a way to avoid another Cake Jalfrezi and that’s to take advantage of the service from JUSTEAT. 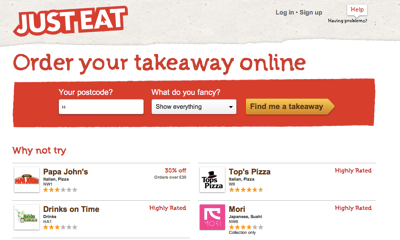 Here are over 18,000 different takeaway menus for you to peruse. As someone who finds it difficult to choose from just one menu (I’ll have the chicken. No the beef. No, the lasagne…) this seems quite a lot to choose from –  but you can search by area and narrow down your options to those places that are actually local or can deliver. So no choosing your favourite meal and then discovering it’s only delivered 10 miles from Edinburgh.

Once you’ve chosen your area, you can further narrow your choice down to the type of food you want to have. I logged in certain I was going to order Thai for supper. However the website – which is also available as apps on Apple and Android – shows you which restaurants are open, and I got waylaid by some of the other choices. Thai suddenly seemed too normal when I could have Persian or Japanese. And of course Indian is delicious. Depending on where you are in the country there is a lot of choice. In the end I went for something I’d never cooked at home – Malaysian.

The restaurant was Yum Yum in Pimlico, which had 380 ratings and 4 stars over all. Not knowing anything about Malay food, or even, let’s be honest Malaysia itself I went for one of the set menus, hoping for an introduction to the country’s cuisine. I ordered at 19:12 and the entry-phone sounded at 19:50.

I heard myself answering it and saying ‘Is that Yum Yum?’. Luckily it was. I opened the door and returned with a bag of goodies that smelt rather enticing. So it proved to be. We started with lean duck pancakes with an intense Hoi Sin sauce, which we made with chopped spring onion and cucumber and ate with the occasional prawn cracker. 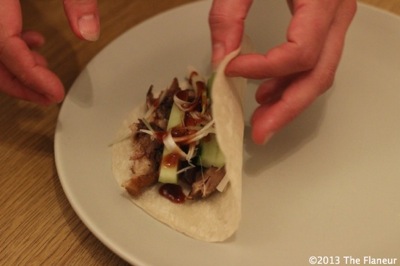 Then we enjoyed the gingery prawns, with special fried rice and sweet and sour battered chicken. This was sweet but not cloying and went well with the mixed vegetables which were less exciting, but made you feel you were being a bit healthy. Before having another prawn cracker. Yum Yum can definitely be recommended, especially given the cost of the whole meal for two people was less than £25. It turns out Malaysian is a mix of Chinese, Indian and Thai with its own Malay twist.

Eventually I was looking at the remains of the dish of king size prawns. There were still three sitting in the dark sauce.

‘I want to eat them, ‘ I complained, ‘But I’m full.’ Hashtag FirstWorldProblems. Heroically I battled to eat one more.

A short time after supper I absent-mindedly picked up my laptop. After a while I realised I was browsing JUST-EAT planning my next takeaway. I appeared to be thinking Japanese.