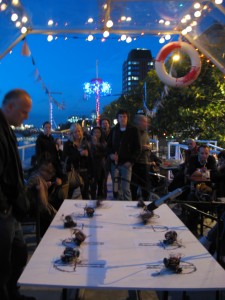 The press release for the groundbreaking 1956 show ‘This is Tomorrow’ included the following statement:

“It is a sign of the times that a Robot is going to open an art exhibition. Robby the Robot featured in Metro-Goldwyn-Mayer’s new science fiction film Forbidden Planet, will open ‘This is Tomorrow’ at the Whitechapel Art Gallery at 5-30 on Wednesday 8th August.”

The 12ft. high robot, described by John McHale Jr. as “a mechanical Churchill” seems to have stolen the show, as kinetic displays are wont to do, whilst Eduardo Paolozzi who figured in TIT would go on to explore the impact of technology on art and life through his robot sculptures. In September 2010 ‘Outrace’  an interactive installation devised by Clemens Weisshaar & Reed Kram, comprising 8 industrial robots loaned from AUDI’s car production line in Ingolstadt, flexed and folded their articulated arms in Trafalgar Square, London, directly outside the National Gallery.

The free newspaper accompanying the show splashed the headline “Robots Land on Trafalgar Square!”. Clearly such events underline that tomorrow is a thing of the past. So, after ripping the robot from its factory setting and confounding its austere function, ‘Outrace’ then let the passing audience input their own temporary instructions to the miniature plant, making robotics funky, a type of sculptural play.

In a show organised by TANK gallery, Berlin based artist Karl-Heinz Jeron personally introduced his robot performance ‘Water Music’ as a “re-enactment”, staged after dark on the top deck of an old Dutch barge moored between Lambeth and Westminster bridges. Jeron’s little orchestra of eight self-developed robots, each equipped with light sensitive sensors allowing them to move along a dance score inscribed on a piece of white paper, produced a fair copy with built in improvisatory moments of the Suite No. 2, Menuet and Bourrée from Georg Friedrich Händel’s celebrated Suite No. 2 in D majorWater Music.

Premiered on the Thames,The Daily Courant of July 19, 1717 described how “… the King took water at Whitehall in an open barge … many barges with persons of quality attended and went up the river towards Chelsea. A city company’s barge was employed for the music, wherein were 50 instruments of all sorts, who played all the way the finest symphonies, composed express for this occasion by Mr Handel, which his Majesty liked so well, that he caused it to be played over three times ingoing and returning.” 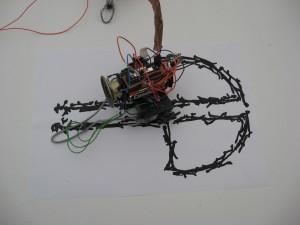 After some initial feedback squeals the table-top bots started to work out, beetle-like, on occasions stalling, on others getting befuddled by obtrusive shadows falling across their path. Jeron has supplied them with an algorithm for thematic improvisation under the guidance of an 18th century treatise Tentamen Novae Theoriae Musicae by the musical theorist Leonhard Euler. Their tinny sound is never unpleasant, and at the end of the cycle they use the baroque material for a comical jam session.

Sourcing data from the media Jeron creates audio and video installations that can shift perceptions about authorship or cultural icons. Händel, an Elton John for the Age of Enlightenment might well have approved.