Found Footage has never been so apt.

Such was the effort made by the team at Studiocanal, who launched a worldwide appeal to anyone who had any information about an original, missing cut of Robin Hardy’s cult classic The Wicker Man. Having located a 1979 cut of the film at the Harvard Film Archives, the film is being released after a full restoration project, both in cinemas and for home entertainment, and for the first time on Blu-ray. Hardy has said about the restoration:

“I am delighted that a 1979 Abraxas print has been found as I…put together this cut myself, and it crucially restores the story order to that which I had originally intended.”

For those unaware of Anthony Shaffer’s phenomenal script, The Wicker Man is set on a remote Scottish island, Summerisle, where a community of pagan-worshippers reside, led by the charismatic Lord Summerisle (Christopher Lee). When a young girl is reported to be missing, a detective from the mainland, Sergeant Howie (Edward Woodward) arrives on Summerisle to investigate, only to find his questions being stonewalled, and his own faith being remorselessly shaken.

Hardy’s fantastic use of imagery and landscape make this film a classic – an aesthetic that still holds up, and deserves this loving restoration. Not gory enough to be considered a horror, the movie is more a psychological thriller, as unsettling as it is provocative.

Capturing the earthy essence of this close-knit community results in some startling sequences; such as groups of couples fornicating in an open field, and theatrical costume parades to appease their gods of fertility. One of the most engaging aspects of The Wicker Man, is the use of song. The pagans regularly sing melodic songs together that have an eerie quality, in particular the new addition within The Final Cut of “Gentle Johnny”, which reveals the nature of these people, and their attitudes towards sex and faith.

Faith is explored with ferocity, in particular Howie’s religious zeal. The character undergoes a tormented experience on the island, which tests his grip on God and Jesus, whilst he attempts to undermine the antiquated beliefs of this secretive community.

A fantastic gem amongst classic British cinema, The Wicker Man is fully deserving of a restoration, which has delivered a potent and fluent rendering of Hardy’s masterpiece.

And don’t worry, Nicolas Cage is nowhere to be seen. 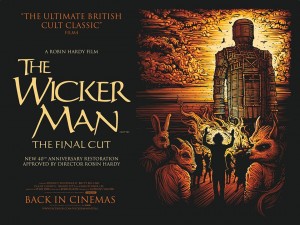