Football might be the most popular sport in the world at the moment, but I foresee a time when there will be Pooh Sticks leagues around the world. Pooh Stick competitors will win Sports Personality of the Year, be sponsored by Nike and drive around in Range Rovers with darkened windows.

This though is all in the future. Pooh Sticks has not yet taken up its proper place in society. It remains niche. Nevertheless 2013 is the thirtieth running of the World Pooh Sticks Championships which takes place on Sunday 13 October 2013 at Days Lock, Little Wittenham. 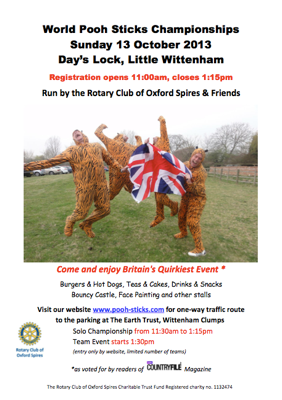 As Winnie the Pooh fans will know, Pooh and his friends enjoyed a game of Pooh Sticks on the river. The World Pooh Sticks Championships started when a local Lock Keeper noticed walkers recreating Pooh’s pastime on the River Thames and realised it would be an excellent way of raising money for his favourite charity, the Royal National Lifeboat Institution.

Currently run by the Rotary Club of Oxford Spires the World Pooh Sticks Championships deserves to be better known across the world. SKY Sports should be setting up Outside Broadcast equipment at Little Wittenham as you read this.

On 13 October 2013, heats and finals will be held to determine the Individual World Champion and the Team World Champions. Members of Little Wittenham village will provide teas and cakes outside the parish church of St Peters, WSD Rotary Club will be firing up the BBQ and there will be plenty of other activities.

Monies raised at the event go to the RNLI, Little Wittenham Church and various charities supported by the Rotary Clubs of Oxford Spires and Wallingford, Sinodun & District.

If you don’t know what Pooh Sticks – though I can’t believe there is such a person – click here. Then start a petition for Pooh Sticks to be accepted into the Olympics.