What is a Lutherie I hear you ask. It’s where expert craftsmen or luthiers make violins, cellos and other bowed instruments. We were lucky enough to have a demonstration from the Maestro Violin maker Alessandro Urso at his Bologna workshop ‘Leuterius’ in the heart of the centro storico. Via Rialto is a street where many craftsmen and artisans practice trades that date back centuries. Bologna has a great tradition of luthiers, going back at least as far as Carlo Annibale Tononi and Arcangelo Corelli in the late 17th century. Alessandro follows in their footsteps, repairing and restoring old instruments, but also creating new ones by hand. 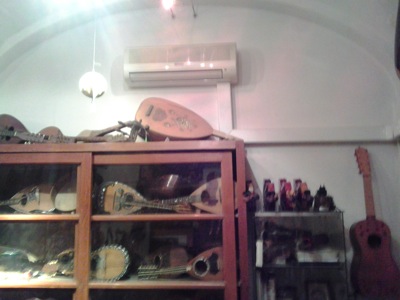 On a work-desk Alessandro showed us the many different tools that are needed to shape the instruments. Two sorts of wood can be used – Maple and Red Spruce. Each has different qualities that affect the sound and the price. Spruce for example is softer and more elastic. 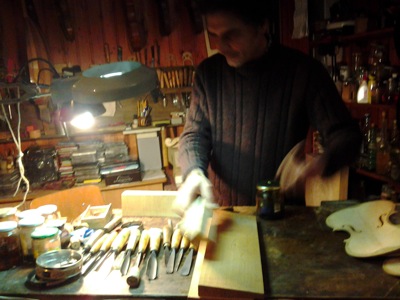 Usually the front and back of instruments are each made from two pieces of wood that have been cut from the same cross-section of a tree. This makes them symmetrical, so they fit together perfectly. The glue Alessandro uses is animal based and the same mixture that has been used for centuries. 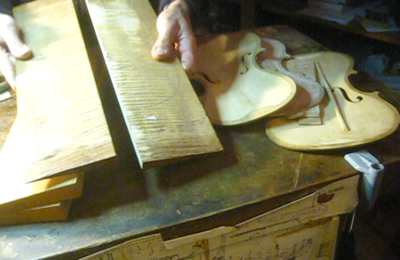 The shape of the violin is created by drawing around a stencil. The whole process of hand-making a violin would take a month if you did nothing else! After the front and back of the instrument are cut out they are chiselled into shape rather like an architectural dome. 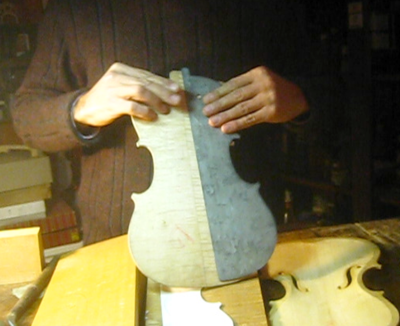 The purfling is the fitting of the filetto, the thin line of different coloured woods that snakes around the edge of the violin. This is a delicate task, using small pieces of wood that have been steamed and then clamped to make the curved shapes. These are not just aesthetic. They help with strengthening the instrument against cracks – important when you realise that a violin with its strings tightened will be bearing 40kg of pressure. 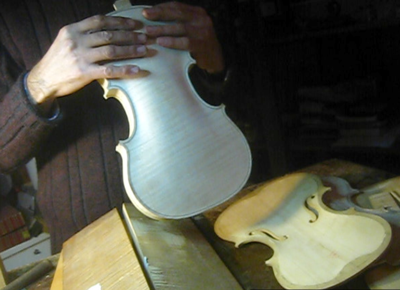 The neck itself takes two days to carve, but finally, after twenty (yes twenty!) coats of varnish the instrument is ready. And boy do they sound good! 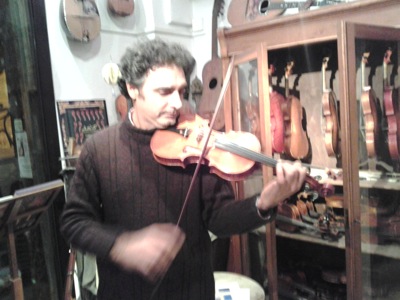 Grazie, Alessandro, it was an amazing lesson and we left wanting to take up the cello.

More details about Alessandro’s work and services can be found here.