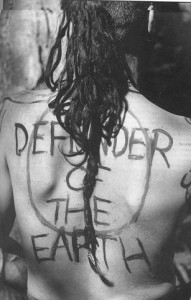 ‘Under Margaret Thatcher, the government had decided to build a network of new motorways and trunk roads in order to realise her dream of universal driving. Hers was a programme not just to facilitate car ownership, but also to close down the alternatives.

We fought for Solsbury Hill because of what it was, what it represented. It was one of the few quiet places in a corner of England that was becoming ever noisier; a scene of slow beauty, of rough pasture, elder coverts and dense hedges, capped with an ancient hill fort. It epitomised the places we were losing to development in every county.’

‘There’s still a few sad bastards who like country and clean air.’

I’ve disturbed one of the ant nests, my blood red DM knocking off the top third of their grassy fort. It mirrors the hill, spilled soil and pissed off yellow ants boiling up from the earth. Some sort of premonition in miniature. Fuck. Indra laughs, you’re supposed to be an environmental protestor, and here you are kicking the shit out of an ants’ nest. Thanks love, I think, but I chuckle along with her, as the golden insects swarm in irritation over me feet. One of them disappears down the inside of me boot; I whip it off in alarm, Indra laughing all the time. I find the ant, but it’s crushed, dead by the time I get it out.  Indra knows a fair bit about the plants and animals and we’ve been out on the hill, her showing me what’s what. I asked her to show me. The sky is eggshell blue. That’s a vetch, she says as I tug my muddy DM back on with difficulty. Little purple pink flowers. A pastel blue butterfly with black frilling round its wings flaps languidly in the late spring sunshine. A Chalkhill Blue, she says immediately. I like Indra. We carry on, back to camp, her pointing out flora and fauna of interest, me taking mental note. I’m quite new to the protest.

The sun’s going down on Solsbury Hill. I can see a few hard-hats off in the distance, a couple of coppers too, the slow storm gathering. When I get a moment spare I’m reading up on this place. Couldn’t say I knew much about it before. I’m a London lad, barely been out to the West Country before, I might’ve been taken as a kiddie by my old man but I’m not sure. Good cider. Funny accents. The hill is ancient, near the city of Bath, once an Iron Age hill fort. So the books I’ve been lent tell me. We went for a trip into Bath for supplies. Nice place.  Arthur led his Britons against the invaders from Saxony here, going down in legend, a story that exists somewhere inaccessible in the recesses of my skull. Another fight is coming.

Peter Gabriel wrote a ‘spiritual song’ about this place, reaching number thirteen in the British charts back in 1977. There are more punks here than Genesis fans, from what I can see. I fucking hate Genesis. The village of Batheaston continues its sleepy existence below the hill, it’s so bloody English, its protector now threatened by the motorcar, the automobile that will become compulsory, rendering pedestrians obsolete, ramblers sad folk of the past, cyclists an eccentric sub-culture fighting a doomed fight. We get told we’re standing in the way of progress. Some of the villagers don’t want the road either, they tell us. They do drive, though. The automobile’s self-fulfilling prophecies as it motors ever forward. More cars? We need more roads. More roads? We better get a car. The meadow ants that go about their business on the grassy hill are blissfully unaware of such arguments.

A moribund Celtic Earth Mother, Sulis, gave her name to this hill. Indra tells me she was worshipped at the thermal springs in Bath, that the Romans called Aquae Sulis. They conflated her with Minerva. I named one of the small black piglets we keep as pets after her. Sulis, that is. What have the Romans ever done for us, we would joke. It confused those other pigs, the fat wheezing ones who looked baffled and amused by our presence. They are ignorant of their history. The younger ones, angry stupid looking men with, yes, porcine eyes, stared silently. Grunted when spoken to, these keepers of the peace. They look at me like they wouldn’t piss on me if I was on fire. The feeling’s mutual.

The Government talk of Britain’s grand past. It seems hollow. Especially the mutterings of The Witch, no longer in the seat of power but with her legacy all around, cut into the Earth, open wounds long to heal. Scar legacies, capitalist cicatrix. How could her talk be reconciled with what they wanted to do to the country. Rip open the history, punch holes in land-memory, tarmac over any dissent in the great rush to progress. Assume that everyone wants that, or better still, tell them that they do. They want to be Americans, listening to Springsteen, driving down Route 66 or something. I like The Boss, but I am English.

It rains, like it does in England. I am up in the trees, working with rope, creating temporary shelters and tree-houses that my child-self would marvel at. It sounds ridiculous when I say it out loud, but sometimes I felt like I could really feel them, alive. Well, they are alive, you know that. I can’t say what I mean. The old words won’t fully form. It sounds like stupid hippy shit when it does come out, even to myself. I wish I could express myself better. When I was up there I kept thinking of ‘The Parliament of Trees’ from Swamp Thing. I am a big comic book fan. I often wondered why people seemed to be able to accept radical ideas of environmentalism, earth elementals, the force of nature, in fantasy, folk lore and fiction, but not apply this to their own lives. To reality. People dismiss these impulses – clearly something that has taken, pardon the expression, root in the human psyche. I’m willing to make fun of myself. But there is truth there. Everything we have, that we are, comes from the land in some way and to destroy that for the sake of a faster journey down a dual carriageway…madness. Insanity reigns. The great rush to nowhere. Build your way out of a problem, dig to freedom. Soon the only places we will be able to buy food from will be in the giant out-of-town supermarkets, only accessible by road. The car becomes necessity, personal choice strangled and put in line. Drive or starve. I do not own a car.

Of course, I arrived at the site by bus, and yes that came by road. I’m not saying that we don’t need roads. I’m not. Only a moron would say such things, but there has to come a point when some people, even a minority like us, say enough is enough. In a way, we’re the conservatives. I remember, a few years ago, a film nut friend of mine showing me a mock-doc, Punishment Park. In it, a bearded American man, pounded by unforgiving sun and hunted by men of the law, says something quite profound that stuck with me. I’m paraphrasing of course, you can’t get the bloody thing on VHS, but he says something like: At some point in history the honourable thing to do may be to be a policeman, a soldier, a judge. Right now I feel the only honourable thing to be is a criminal.

He says this with no joy, just weary resignation.

Tonight is Beltane. People vary on the spelling. Indra tells me The Old Irish spelling of it is Belltaine, or Beltaine. We Anglicised it, mixed it with up May Day. None of those dodgy geezers dressed up in green and white for us, no way. Today we’re having a party. I had sat as Indra and others worked on the poster, to be later photocopied and handed out wherever it could. I handed them out in Bath and in Bristol. An old lady with purple rinse hair told me to get a job. Some first year student girls in grunge T-shirts, they were fit, showed some interest. Yes, we went by car.

Home-made and rough hewn, every available bit of space was crammed with handwritten information. A professional designer would disapprove.

THE SPIRIT OF TWYFORD DOWN GETS EVER STRONGER

In the centre of the poster sat an image of what looked like, to me, the Green Man, a Jack in the Green. Stupidly I thought about the Swamp Thing again. Although it could have just as easily been some sort of sun deity. Sulis? I didn’t know. It did look impressive though, and felt like it was the appropriate image.

The day was warm, sunny. People were camped, chatting. Some travellers arrived, some of the Dongas too. They were the ones who’d been at Twyford Down in ‘92, protesting the A33 Winchetser bypass with the final section of the M3, destroying in its wake two SSSIs, two ancient monuments and one Area of Outstanding Natural Beauty. One of the most protected areas in England yet in two years reduced to a mere motorway. Insanity reigns. I spoke to some of the Dongas. Nice people, by and large. They told me, when I asked like a awestruck little boy, they took their name from ancient system of track ways that used to crisscross the country. I could remember seeing them on the TV in my mum’s place in Islington. They travelled in an ancient way, slow, human in scale, they said. They said the opposed the inhumanity of the motorcar. I agreed with them on that point. The crazy Earth First! Fuckers had been involved as well. I didn’t know what I thought of them. I wasn’t much good in a scrap.

I had always greatly enjoyed the Hellblazer comics that involved the New Age travellers, disruptions of ley-lines by the Tories in order to disrupt the land’s power, and an Earth spirit called ‘Jallantilliokan’, Bullshit, mostly, but a lot of fun. It taught about the Beanfield, the travellers, police bastards. Stupid, but there you go. School never taught me these things. Two intertwining dragons, elementals, bursting forth from northern Scottish seas, it was compelling to my teenage self. Relevant fantasy to sink into, which fed, a little, into my own life. Or I took it and ran with it, one of the two.

Some of us here in the camp refer to us, collectively, as ‘internal refugees’. Indra says it a lot. I try and untangle what that means as I sleep near the stars, rope and tarp for a roof. I am agile and good up in the trees. Some of the older guys here sing the Specials tune ‘Monkey Man’ at me whilst I’m clambering up into the branches. It makes me laugh.

I wonder where all this will end, shivering in the damp, smoking endless rollups. I am mud spattered, bedraggled. My hair needs washing and my beard is expanding. People, my parents included, would say I was crazy. I am twenty one years old. I lie awake in the trees, looking at the stars, thinking of when my old man took me and my brother round Blean Woods in Kent. To Pegwell Bay. The White Cliffs of Dover. He’s probably responsible for me being here. I smile when I think this.

Tonight’s Beltain. This is our day of celebration. If everything else goes wrong, if JCB and the diggers come and tear us apart, we will always have this.