The Cut is a cricket shot – David Gower used to play it beautifully. But even though it is a cricket documentary, in Warriors The Cut has a different meaning. Here it refers to the practice of Female Genital Mutilation (FGM). This documentary is a peculiar combination of ultra-amateur cricketing skills and debates about FGM among the Maasai in Kenya. This tribe is male-dominated and women have few rights. Girls as young as six have suffered FGM and early marriages. FGM contributes to the spread of HIV/AIDS and the younger generation is trying to eradicate the practice. 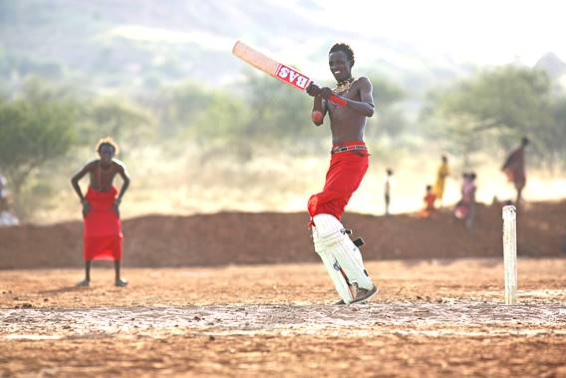 Thanks to their female South African coach Aaliyah Bauer the Maasai Warriors in Kenya have started a cricket team. The British army bulldozed a flat mud pitch for them and from somewhere unnamed – I’m guessing there isn’t a Sports Direct around the corner – they received pads, gloves, bats and balls. The odd thigh pad appears. They play in their traditional dress of red tunics, sandals and head-dresses. The main problem for this cricket team is that there are no other cricket teams anywhere near. It’s a team that has never actually played a match.

‘We never had a voice, then we discovered cricket’, has to rate as one of the most unlikely phrases to hear in a documentary. The players come from different villages and the sport has helped local cohesion. The players are using the platform the team provides to talk to people about female rights, HIV/AIDS and in particular FGM. Which came first the cricket or the antiFGM campaign is not clear but cricket has brought the younger men together so that they can speak with one voice. They appear to be having an effect on the village elders.

For surely non-cricketing reasons – who wouldn’t want a team of African Warriors in their tournament – the team are invited to play in an amateur 8-a-side cricket competition in London. The documentary makers follow them on their trip and much is made of the Warriors looking around the Home of Cricket. This warrior-abroad angle is taken too far with many culture-clash shots of the Warriors in the London Eye or on the Tube. Although chapeau to the other tube passengers, they don’t bat an eye when the traditionally-dressed warriors get on.

Who is the documentary aimed at? Cricketers will find the FGM talk unpleasant and the cricket unskilful. Viewers interested in the fight against FGM will find the long cricketing interludes tedious. The level of skill on show is low – I feared the players would soon be returning home from England with dreadful injuries. The film gave me the false impression that this amateur Maasai side were playing sides representing South Africa, New Zealand and other top cricketing nations. Actually the sides in the tournament were from other countries, but they didn’t represent those countries. Scanning the names of some of the teams they played – one was called Irritable Bowl Syndrome – the cricket is clearly of much lower level than is initially implied, something that was made abundantly clear when the games started.

It is sad to see the Warriors taking on Western habits during the games. They start high-fiving each other after wickets fall. You wonder how else the short trip to London will affect them, and how they will appreciate their muddy pitch having seen the near-cricketing-perfection of Lords.

Although much is said in English, some voices are subtitled. Others are not. More should be in order to for viewers to understand more clearly.

Warriors is a strange mix of cricket, Africa and female rights abuses. At one moment famous English cricketers are speaking, at another the barbarity of FGM is being analysed. Dreadful skills are being demonstrated on the cricket pitch and tribal elders are claiming that young men refuse to marry women who haven’t undergone FGM. It is the strange combination that it sounds.

The story is framed to end in an uplifting manner, though it is not cricket per se that changes the elders attitudes towards FGM, but the young men’s refusal to marry women who have been mutilated. Nevertheless this film shows how sport can unite communities and proves that cricket is the greatest sport in the world.

I have just discovered that 45% of any profit from ‘Warriors’ is going back to a trust in the Maasai community, which will be used to create an education centre for young people in the region. There they will learn about their health, their rights, and, of course, cricket.