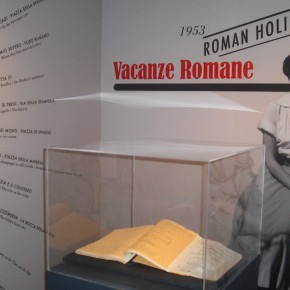 The legend of Audrey Hepburn has taken on many different guises over the last five decades. There is Audrey as Holly Golightly, the wide eyed ‘socialite’ who flitters around New York in the early 1960s in her now iconic black Givenchy dress, belonging to no one. There is Audrey as Princess Ann, rebelling in Rome on a Vespa with Gregory Peck and cutting her hair into an elfin crop at the Trevi Fountain. There is an almost androgynous Audrey in Funny Face, dancing with Fred Astaire. Then there is Audrey herself: the woman with such undeniable elegance and grace that it didn’t take her long to pass into history as one of the most celebrated icons of the twentieth century.

When Audrey Hepburn is brought to mind, then, it is rarely as a mother, or as a wife, or as a daughter.

The ‘Audrey a Roma’ exhibition, which ran from the 26th of October to the 4th of December at the Ara Pacis, sought to change the one sided image of Hepburn that most people hold. Curated by her son Luca Dotti, and designed in part to celebrate the fiftieth anniversary of Breakfast at Tiffany’s, it contained previously unseen photographs, videos and clothing that brought the personal life of this star to the public conscious.

It was the first tribute to Hepburn that had ever been seen in Rome, despite the cultural associations that she had with the city as a result of her films, and as well as the fact that she made it her home for the whole of the 1970s.

Entering the exhibition, we walk past monochrome, ever glamorous images – Audrey in white, descending the steps at Trinita dei Monti, crossing the road at Via Della Barchetta, reading a newspaper in a cafe at Piazza Navona. Fleeting moments of her private life are captured, but she loses none of her grace despite whilst engaging in her everyday business.

The exhibition is introduced by Luca Dotti, who describes his mother as a woman who took great pleasure from dropping off her children at school and walking her dogs. Dotti was born in 1970, Hepburn’s second son, and it was from this point onwards that she chose a private, family life over her previous glamorous one. Rome and its residents gave her the freedom to live as she wanted.

One of the most striking objects on display is the original script from Roman Holiday, which is complete with Audrey’s annotations  –in one scene, she makes a note to remind herself that Princess Ann has ‘never been so happy’.

In 1972 the photographs burst into colour, taking Audrey from the monochrome icon that most of us remember her as to a much more lifelike –it could be said three dimensional– form. In colour, we see her leaving from the bright blue gates of the Orto Botanico, in what one imagines has been a relaxing walk.

Some of the footage is startlingly personal – previously unseen videos of Audrey on a boat trip, for example, falling in love with her second husband Andrea Dotti, as well as later films of their wedding and of her feeding her newborn son Luca; buying flowers in Piazza dei Spagna whilst living in Parioli in the 1970s, walking with her mother at Trinita dei Monti. Even her passport in on show, behind glass casing.

Also on display is the Vespa used in Roman Holiday – small, olive coloured, and hardly large enough to fit two people. The daily life of Audrey Hepburn and the iconic images by which we remember her are placed side by side.

Despite the candid aspect of the photographs, depicting the relationship between Hepburn and Rome, the glamour still seeps through. We can read, for example, about the structure of the now most famous dress in history – the black cocktail dress from Breakfast at Tiffany’s – which drew attention to the neck and arms, and which Hepburn was able to pull off so brilliantly because of her gamine frame. Further analysis suggests that, in hiding behind sunglasses, Audrey was able to rewrite ‘the rules of seduction, based on mystery and intellect, style and humour.’ But we sense that this image became increasingly less important to her as the years went on, as family life became her ultimate priority.

One of her most important roles, of course, was as a Goodwill Ambassador for UNICEF. 25% of the ticket cost from the ‘Audrey a Roma’ exhibition will go directly to UNICEF Italy’s mission in Chad, combating child malnutrition.

Audrey’s last humanitarian trip was to Somalia in 1992. She described what she found there as ‘hell’, and the exhibition does not shy away from pointing out the fact that the situation is repeating itself now.

It seems fitting, then, that proceeds from this exhibition will go towards a cause that Audrey Hepburn was so heavily involved with – a mothering role that was more important, as she may have said herself, than her other, as an overriding cultural icon of the last century.

The ‘Audrey a Roma’ exhibition was on display at the Ara Pacis, Lungotevere in Augusta, Rome, until the 4th of December. It was organised by the Audrey Hepburn Children’s Fund, UNICEF, and the Friends of Audrey in Rome, and curated by Luca Dotti, Ludovica Damiani, Sciascia Gambaccini, Guido Torlonia, and Sava Bisazza Terracini.