How much can you tell about a man from his socks? This unlikely question exercised me whilst watching Changing Rooms by Marc Camoletti last night. In it Kevin Marchant plays Bernard, a high-ranking French civil servant with an elegant flat on the Boulevard St Germaine. He teams a blue cravat at one end of his body with a pair of Superman socks at the other and imbues the character with a slightly resistible charm. 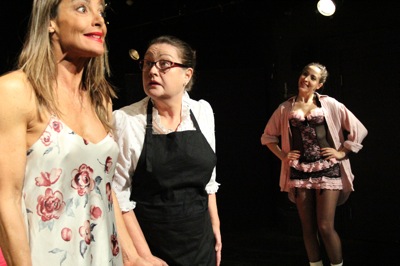 ‘I’m not sure the coast is going to be clear,’ says Bernard telephonically at one point to his lover. This seems to sum up the plot nicely – although a line later in the play suggests we can equate the lies told by husband and wife to those which emanate from Bernard’s government department. Does deceit filter down from the Palais de l’Élysée and infect everyone? Is the implication that no one is to blame, c’est just la vie? Well it wouldn’t happen in England…

Playwright Camoletti wrote more than forty plays and is best known for successful farces Boeing Boeing and Don’t Dress for Dinner, both of which ran for seven years in the West End.  He died in 2003 yet this is the London premiere of Changing Rooms, translated by Jonathan Holloway and Anthony Wood. The script is not substantial, but the cast have fun with the situations it throws up and enthusiastically slink around the stage in various levels of undress.

Staged in the well heated fringe theatre above the buzzing Drayton Arms in South Kensington, the set boasts seven different exits. All of these are utilised as characters pop on and off the stage, narrowly avoiding each other in the best traditions of farce. Director Anna Ostergren has delivered a complicated choreography which has actors whirling on and off with speedy abandon. A sofa, a disappearing whisky decanter, an old fashioned telephone and a photograph of Bernard’s wife, (sorry, sister) are the bulk of the props for a play that depends for its success on careful timing.

Taking infidelity as its cue, the action takes place in the sitting room of Bernard’s flat. The wealthy civil servant pretends he has to fly to Nice for a meeting and thinks he has persuaded his wife to visit her parents instead of spending the weekend alone in their Paris apartment. This will give him the weekend to spend with his mistress Brigette in the flat. His wife Jacqueline, played by Maria de Lima as a bored thrill-seeker agrees – spotting a cover story for spending the weekend in the flat with her young lover. Now both of them have an incentive to lose the housekeeper, so they work together to persuade Nana to go and visit her family, paying her train fare and taxi rides as an incentive.

Clearly none of this plot line is going to happen, or after ten minutes the actors will say goodbye to each, walk off-stage and the audience will be left feeling short-changed. Instead, after packing weekend bags with clothes they don’t intend to wear the three protagonists wish each other Bon Voyage and head out, before returning to the flat one by one.

This is a farce with a ringmaster who knows exactly what is going on. The other characters and their lovers spin around the flat, but Jill Stanford’s Nana is soon aware what is happening. Played as a worldweary aunt indulging much-loved nephews she does her best to keep the different pairs apart, and whenever anyone does meet someone else she is conveniently on hand to make up a suitable reason for their presence. She is the only person who knows what is going on – if she is not orchestrating proceedings then she is at least explaining them – both to the characters and the audience. Having accepted cash with no intention of using it to travel to see her family she is no more honest than the others, especially when she accepts bribes to forget what she has seen.

At times the nocturnal race of people around the flat seems forced. It is the middle of the night, the characters have schemed to be alone with their lovers – it is odd that they spend so much time prowling around doing things like fetching glasses of whisky from the sitting room. The believability levels are pushed a bit too far at moments, for example when Bernard meets – in his own sitting room – Robert, his wife’s lover. He displays no surprise at all that there is a stranger in his flat. Similarly when Jacqueline eventually comes across Brigette in her lingerie she totally accepts Nana’s invented reasons for her presence.

These are issues with the writing rather than the production, which races along giving little time for thought. All of the cast’s appearances and disappearances have great timing but Nana is the definite star of the show. Milan Alexander and Anna Lukis play the two young lovers, Robert with diffidence and gold boxers, Brigette with the endearing straight-talking of someone who doesn’t quite understand what is going on.

This is a production where actors can click their fingers and control the music being played, where crashing a Maserati is a regular occurrence and wearing boxer shorts with shoes and socks, yet no trousers, is normal. Maybe in France it is, but it brings us back to Bernard’s choice of socks. Why would a fashionable Parisian sport Superhero socks? I decided they were an unconscious warning for Brigette that he was leading a double life. Unfortunately she didn’t spot the message.