I know there is a debate about the name of Derry~Londonderry, but I didn’t realise there was a third possibility… 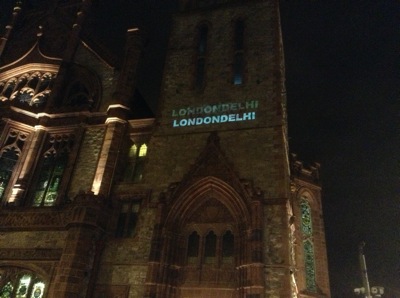 For four nights this autumn artworks of light, projections and fire have been illuminating the evening streets of Derry~Londonderry, the UK’s first City of Culture. Works by seventeen international and local artists have taken over Northern Ireland’s second biggest city in an attempt to challenge people’s perceptions of public spaces. Like anything outdoors in our temperate part of the world success depends to a large extent on the weather. Even planning an outdoor event in July involves answering the question What shall we do if it rains?, so Artichoke Trust, the organisers of Lumiere – an outdoor festival in November – should get a medal for bravery.

When I visited the weather was playing ball, which was good as the artworks are spread around the city and it involves some walking to see them all.  From the Bogside to the Fountain and from Waterside to Cityside across the Peace bridge Derry was host to 17 large-scale artworks. The route around them all was 4.5 miles long, and with our excellent guide Elena we managed to see most of them, starting with the pieces inside the old walled city.

Renowned Polish artist Krzysztof Wodiczko was commissioned to create a new work especially for Lumiere, which, though specific to Derry is not precisely site-specific as it moves around the city. Public Projection for Derry~Londonderry is the result of the artist talking to a cross-section of the population and recording their views on the past conflict and their hopes for the future. Wodiczko hopes the work will help create democratic public spaces where all points of view can be expressed non-violently. The voices were symbolically broadcast from an old ambulance, whilst a simultaneous projection of the words onto the Guildhall gave a focus for the people gathered in the dark – reading and listening to the work that tried to engage directly with Derry’s past.

Deepa Mann Kler has emblazoned lyrics from local band The Undertones on top of the BT building. A Teenage Dream’s so hard to beat. It is a welcomingly confusing intervention when such neon lights are generally trying to sell us something or engrave the name of a company in our minds. Tim Etchells has also used a neon sign to make a statement about the industry that once made Derry the shirt-making capital of the world. Visible from all around the city it is an optimistic reminder of how the city’s future can be completely different from the past. Local primary school children from both ends of the religious spectrum – and probably the middle – came together to create Twice upon a time, an animated projection on the side of the Ebrington barracks. I reckon they had some technical assistance as it was a slick production that totally changed the way the ex-army building appeared and maybe the way it will be perceived. The film’s plot appeared to centre on finding some fish and chips, which is a MacGuffin Hitchcock should have utilised.

Most of the works in Lumiere were not Derry-specific and made no attempt to comment on the past or point a way for the future. Many were, as the organiser admitted, ‘pink and fluffy’ designed to give the viewers something fun to experience as they walked along the route. Given Derry’s history that in itself is an achievement, making the streets that have seen horrors a place where locals can take an Italian style passagiata – though it was a little too cold for a gelato. 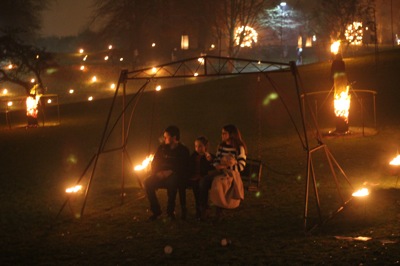 Most impressive of the experiences and installations on offer was the Fire Garden by Compagnie Carabosse. Thousands of lanterns, braziers and fire sculptures filled St Columb’s park. I would have thought Health and Safety regulations would have meant that only three people would be allowed in at once, and they would be led by a guide carrying a fire extinguisher at all times.

Actually the park was filled with hundreds of people all walking in different directions amongst the fiery sculptures, some of which hung dangerously in the trees. I did ask one of the few guards how many fire extinguishers were around. His answer was unexpectedly sweary – it might have meant an awful lot, though it had elements of I knew there was something we’d forgotten. The piece associated fire with pleasure rather than petrol bombs and bonfires and brought a strangely calm atmosphere as people enjoyed experiencing something completely new.

Sponsored by Northern Ireland Electricity and produced by Artichoke Lumiere transformed Derry into a giant outdoor art gallery and created new memories for a city that is rediscovering and redefining itself. There are still events to come in Derry’s 2013 Year of Culture – see here for more details.