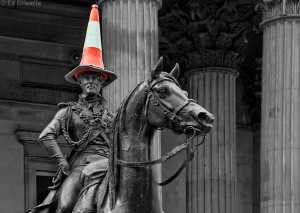 In front of Glasgow’s gallery of Modern Art (GoMA), on the Queen Street pavement, stands an equestrian statue of the Duke of Wellington sculpted by Carlo Marochetti in 1844. However my focus is another daring group of sculptors that have long since made the work their own. In an ongoing project that began around the early 1980’s it has now involved possibly hundreds of artists. Those sculptors are the people of Glasgow. Their sculpture can be understood as a double-handed backlash to the personality cult. Both the authority of the subject-that which is made i.e. Duke of Wellington and the authority of the maker, traditionally the artist, are undermined.

They managed to find suitable attire for the pompous symbolism of the equestrian portrait- with its roots in Marcus Aurelius and on throughout history including Velasquez’s Phillip IV of Spain and Van Dyck’s Charles I etc. The simple, single addition of the Duke’s ‘hat’ returns him to the earth with the rest of us- not immune from ridicule and farce as none of us are.  Essentially it knocks him down off his high horse.

This defiance does seem to be something of a Western trait. The David Hume statue in Edinburgh’s royal mile 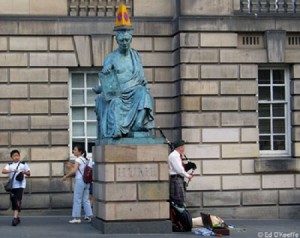 was once ‘coned’ but the offence was removed, deemed unacceptable by the council and is now soberly without additional decorative embellishment. The Duke would not be the icon it is without the people’s contribution. A numberless, faceless, nameless artist- a potentially huge collective of many people working to bring about a continued image.  There is a certain camaraderie to its continuation for as soon as the cone is removed someone else completes the sculpture on behalf of the people. Usually the very next night some risk-taking rebel climbs the nearly 20-foot statue.

With the city’s socialist leanings the work is not just satire of the rigidity of the class structure honoured by the handing out of titles such as Duke but a satire on the banal predictability of art. Prone to mimicking the same dignified motifs cold century after cold century until eventually things changed and an object as innocuous as a traffic cone prevents art from repeating the mistake of repeating itself.

Often the milestones of modern and contemporary art are not, on face value, that difficult. The mumbled discontent that rumbles through a typical gallery of ‘I could do that!’ is partially justified. Unfortunately every revolution seems obvious once it has happened. Schoolchildren will be stunned to hear that many regard the wheel as the greatest invention of all time-the wheel? A 3D representation of a general shape which itself exists naturally? Nothing could be seem more rudimentary than the geometry of nature. So if those same mumblers could actively bring about the next movement in art and indeed-as they so vehemently claim- do it themselves then their words would validly hold. At some point however most of us register the stark difference between saying something and doing something.

There may be those out there that are sceptical of the ‘Joke of Wellington’s status as a work of contemporary art. This scepticism may arise from not wishing to associate a freeing, public bit of fun with the awfully serious and sobering contemporary art. If it is art it might be taken out of the hands of the creators and become the discursive property of the critics and commentators. One possible reconciliation between the ‘high’ intellectualism and the ‘low’ vandalism is pointing out the similarity between the people’s Duke and Salvador Dali’s ‘Lobster Telephone’. 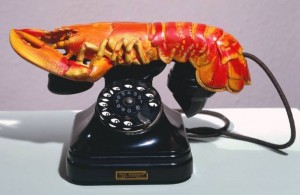 In the early 1930’s Dali started working out the idea of the Surrealist object with the ‘Lobster Telephone’ and the ‘Lips of Mae West sofa’ being the two most iconic examples. Both the telephone and the Duke display the mystery around an unexpected conjunction of two completely unrelated random ordinary items synthesised into a third, separate autonomous item. The irony is that some of the people who might not ‘get’ Dali’s telephone may well be the ones who fused the two disparate items of the Duke and thus created a classic piece of graffiti which is now, or if not it should be, considered contemporary art. They both emanate a similar splash of bright kitsch orange- like a beacon steering art away from the grey mists of conformity. This submits evidence that the slightest of alterations can breathe life into something as jaded as a bronze equestrian statue of a Duke. The Duke’s new life and new image is so inextricable that it is difficult to imagine him without his cone and if you do catch the rare sight of the cone less Duke it looks unusual as if something vital is missing.

I personally believe we can consider the people’s embellishment as the statue’s crowning glory. All the high and mighty intellectuals that rave on and on about a need for art to be for the people should be thrilled- this is theirs the public have reclaimed public sculpture. Recently though there have been concerns that the statue has suffered after the years of scrambling about that it has had to endure.  Whether or not the ‘coning’ of the Duke has caused damage to the statue can be quickly verified and then never again doubted. But to state as some have that it is detrimental to the city’s image of itself as a city of culture is ridiculous. To believe that culture is crafted and circulated through one dogmatic channel- its formulation taking one form- suppresses not only the modern urge of creativity but also the elemental urge to be and think freely. The collapse of the western pantheon of culture should be one of the proudest achievements of late 19th and 20th century art. But of course it hasn’t collapsed completely, its towering ego was just necessarily deflated. Any artist now wishing to sculpt in the style of Marochetti is free to do so- presently culture can grow from anything into anything. Before this deflation a select committee of kingmakers pulled and persuaded the shackles of tradition and art was their puppet but now, through severed righteousness, it is everyone’s. Thankfully we live in a time where acceptance is thrown wide open-open enough to comprehend that one kind of damage is another kind of improvement, a distress can be a help, a love can be a hate and a destroyer can be a creator. That is the position held by the coning community they have physically destroyed parts of the statue (the Duke has lost half his sword and his spurs) whilst have created a new work with an enriched meaning and appearance.

Above all I think the modification of the statue stands as physical testimony to the city’s motto- ‘Let Glasgow Flourish’. Following this to its logical and literal conclusion we are obliged to let go of control despite the conclusion not being what we expected or what makes us happy. Regardless of how the Duke divides opinion this is what it has become and, like so much art, it wasn’t really finished-it simply flourished.