On Tuesday, December 6, 2011 there was a discussion in the Tate Modern about contemporary art exhibitions planned in the Flemish part of Belgium in 2012. The director of the museum, Chris Dercon, insisted that curators answer the question about how they describe planned activities and if an “event”  is the right word in the Derridean or Foucaultian sense of something non-repeatable. 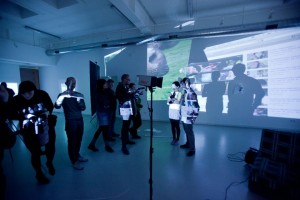 We saw the art action, WebJs, at the Nida Art Colony (a brand new residency department of the Vilnius Academy of Arts, Lithuania) as an event in the Derridean and/or Foucaultian sense. A mix of eight weeks research and an endless stream of internet data resulted in a five hour performance on the 18th December where seven artists, 54 livestream viewers and 89 visitors were involved.  The performance was transmitted in real time over the net. Visitors to the Nida Art Colony were invited to enjoy walking with a laptop computer around the space to appreciate the Mackenzian state of being – wirelessness[1].

One of the residing artists, Robertas Narkus, wrapped the event around his understanding of the notion of “emotional vacations” – a term, which referenced Shakespeare’s deaths of both the King in Macbeth and of Ophelia in Hamlet.

WebJs was extended to the Internet radio and Neringa FM with presenter Linas Ramanauskas, who together with piano virtuoso Marija Kalvelyte and prominent Lithuanian singer Jurga Šeduikyte performed a delayed sound piece ranging physical locations at the secondary school in Nida, Neringa FM studio, and the Nida Art Colony. “There is never a real time broadcast, only a delay because of the net structure; the real time is only what our eye sees, or while we act”, said Ramanauskas. 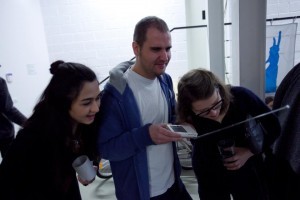 One of the artists on the project, Darius Mikšys, awarded a special mention at the Venice Biennale 2011 was performing the Internet itself asking the audience to “browse” him. While “browsing” the artist we realized that he is not yet a cyborg, although such an option was proposed not to be excluded: in 23 years might an artificial chip be introduced, which, if implemented into the human body could browse the Internet naturally.[2] A traditional browser-based piece was offered by video artist Andrius Kviliunas, who after five weeks of hacking websites and browsing YouTube, resulted in a collection of YouTube speeches given by media-covered politicians such as Berlusconi, Merkel, Putin, and a few others. Locking out the browser feature of navigation, Kviliunas offered the surfer the chance to meditate while listening to well-known voices.

Yet another piece featuring found footage on the Internet presented by Irma Stanaityte, who was working with “catch-concept”. Stanaityte collected a number of images showing fishermen with their catch, exhibited alongside texts taken from sites devoted to dating possibilities, the idea being that the fisherman would compare a real catch with his ideal of a lover.

One of the most visible pieces in the show, jumping on the sofa by Narkus, reminded anyone who’s seen voyeuristic behaviour as a classic example of the games of Adam and Eve in the Garden of Eden. The project was linked to YouTube, a virtual space where documented performance was uploaded. A project using available material on the net, Folksomy, performed by the JODI.org collective, could also question the borders of privacy within the Internet, though here, a viewer might see an extended version of Internet use.

Wrapping up an eight-week-long event on Internet research in 2011, could we say that the Narkus’ sofa-jumping performance is a new media? Or even more radical: is an umbrella-destroying performance by software artist Dirk Paesmans from JODI.org collective new?

Referring to Lev Manovich’s definitions of new media, we would probably be confused: if computer-designed and printed media is not necessarily new, what then is the whole discourse on new media?

Probably all the discourse should be defined by context, concepts and ideas and not be based on technological solutions, offered by Manovich, otherwise we are approaching a yet another language of new media, which is in between human and computer.

[2] The technology develops fast. It is not new anymore, that an electrode, attached to the brain could stimulate it depending on what action from body is awaited. Helmut Dubiel, a German sociologist suffering from Parkinson disease visually describes how it is at stake to carry a “Brain pacemaker” in his book Deep in the Brain, Europa Editions, 2009.