The Vault Festival throws its doors open for another year to showcase new and fantastic theatre. This year it seems to be more organised but still maintains its shabby ‘street theatre’ appeal. On the one hand you could say it has become a victim of its own success as the whole building was shoulder to shoulder but on the other it is amazing that with the astronomical cost of West End theatre tickets, grass roots theatre can be enjoyed for a reasonable price and new and upcoming groups can find a stage on which to share their arts. 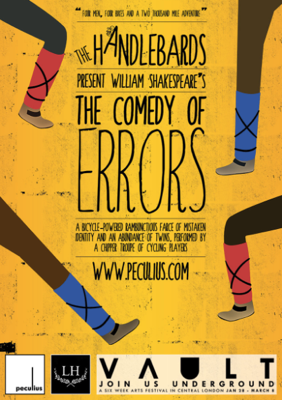 The Handlebards’ A Comedy of Errors must be the jewel in the crown for this year’s festival, playing to a packed audience in the Crescent theatre. Not a second to pause, this riotous and energetic production does not let up for one single moment. The sheer vitality of this four man group (Paul, Callum, Callum and Tom) is astounding and draws you in with their charisma, comic timing and above all their love and dedication for their craft. It is impossible to credit one with more skill than the others as they work together as a well-oiled machine and let the story run over and through them.

The moment you head upstairs to the theatre you enter a room that is akin to the Korova Milk bar from A Clockwork Orange that uncomfortably smells of feet (this being the vomitorium perhaps a play on words?) then through the next doors into the theatre proper. The stage design whilst frugal (a white tent with ends folded out to become stage left and stage right connected by a simple brown sheet) is used to great effect, particularly when illuminated by a set of bicycle powered lights.

The actors mill around the stage saying hello to the audience, throwing sweets to them and generally acknowledging that the audience and the actors are not separate entities. When Egeon tells his story, the action is portrayed through the use of crude but hilarious puppetry and instantly the story becomes clear. It also becomes clear that this is going to be an extraordinary telling of this play.

As there are only four actors they jump from character to character with a tinkle of their hand held bike bells, leaving a prop to represent the silent characters on stage. At one point each actor is holding several props in each hand and weaving from one to the other. The scene where Adriana drags Antipholus of Syracuse to dinner is the funniest and most inventive. They use the idea of the wall from the dumb show in A Midsummer Night’s Dream to represent the door of Adriana’s house, so when Dromio is speaking to his identical twin the actor is running from one side to the other whilst the door holds a plate with Dromio’s name on it to represent his non-speaking counterpart. The play starts as funny then builds and builds to a crescendo of orchestrated chaos with each actor switching between characters whilst audience members are fished onto the stage to become more props.

A Comedy of Errors is always a difficult play to perform as disbelief must be suspended at the ridiculousness of the situation, but this very clever group do not try to hide the failings of the play; they revel, expose and shine at those moments where other groups often fall flat. A must see for lovers of Shakespeare and for those that don’t, as The Handlebards, without altering the text, make it accessible for all.