What is a photograph and how might it help us look at our surroundings differently?  This was the idea that inspired my class of ten seventh-graders from the tiny village of Juanga, located in the state of Odisha, India.  When you grow up in a rural farming community where the power shuts off indiscriminately and you rarely, if ever, leave the region, your opportunity for creative exploration through art can be near non-existent.  For me, this was a perfect place to bring an introductory class on digital photography.

In modern India, traveling to remote regions such as this is much easier today than it was just ten years back.  Hip modern airlines replace clunky railways making interstate travel faster at affordable prices.  I flew from Delhi to the city of Bhubaneswar on the always stylish, IndiGo Airlines.  From Bhubaneswar I headed to the coastal town of Puri to stay with a friend for one night.  The next morning I was off to Juanga, a tiny little village that you won’t find on a map, but is now being connected to bigger towns with the ever growing expansion of paved roads.  This happened to be my second visit to this area and it was wonderful to return to the region and its people. 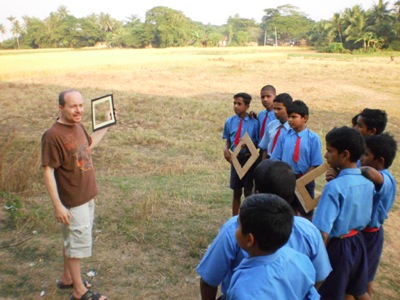 StudentsWithFrames: Joe discussing the use of the cardboard frames with the students.

I met up with my students in a classroom at the local high school and brought with me a set of cardboard frames that would serve as our “camera” for the first day.  I started the class by introducing a basic understanding of composition and how the camera has only the limited view of the frame.  Working with the frames allowed the students to really think about their subjects as I challenged them to choose only landscapes, then only people and finally, “nothing living”.  Looking at an inanimate subject such as a pile of bricks began as an unusual idea, however if we came in close to the bricks we saw texture, light, shadow and angles that filled the frame with something far more interesting.  The following day the ten students were broken into groups of two and each group was given a simple digital camera that they would be using for the duration of the class.  We first worked on taking images of objects in the classroom and then stepped outside to photograph each other, creating posed images.  Over the next two days we explored a variety of concepts such as giving the subject weight by framing balanced and unbalanced images, looking at repeating patterns in the landscape and portrait versus candid photographs.  After the students built up a feeling for these concepts, we took some trips into the nearby area.  It was quite a sight to have ten kids running into the village with cameras snapping shots of everything – I’m not sure the locals knew what to make of it all. 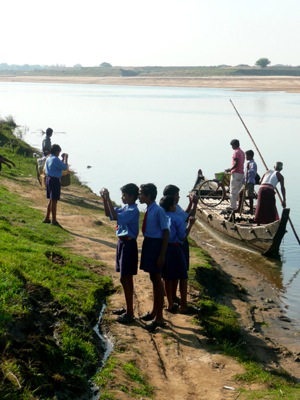 Students on a field trip near a riverside.

On the last day, the students had the task of looking through all of the photographs they took and choosing their three favorites.  It was great to see how focused they were on the task of reviewing their work and taking the time to really look at each image.  Their growth as young artists over the ten days of the class was what left me most inspired.  Having taken the concepts taught to them the end result is a collection of captured moments that reflect life in their community.  Near the end of my time in Juanga I was walking with the students and one of them pointed to rows of recently harvested rice stalks laid in a field and said, “look… patterns”.  It was that very moment that I hoped they would understand from being in the class.  In the end, it was about more than the composition of a photograph, it was the opportunity to gain a different view of the world around us.  To notice everyday things that we might not have given a second glance. 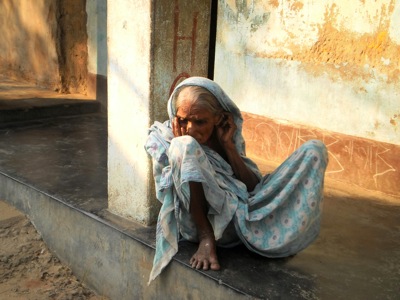 This was more than just an opportunity for education, it will also be about giving back.  In the Spring of 2013 I will be having a small gallery show in New York where the students work will be on display and auctioned.  The money raised at the event will be given to the student artists to their school.  Though they may still be young, I feel it is important that they know there is value in their creativity.———-Joe is the founder of The Project Solution, a nonprofit organization that empowers everyone to become a philanthropist by using 100% of donated money to fund an infrastructure project for a community in need.  As an artist, Joe continues shooting photographs with film and hand prints his work.  To learn more about his nonprofit, visit: www.theprojectsolution.org.  To see some of his photography, visit:www.photo.net/photos/joego