Any good short film screening will have an eclectic mix and the animated shorts programme (Fast Film, Slow Burn: Uncommon Singularity) at the Manipulate Visual Theatre Festival at the Traverse Theatre in Edinburgh had just that. In total 10 films were screened for a range of countries such as Canada, Estonia, Russia, France and Hungary. Different visual styles were on display and a variety of animation techniques were exhibited.

The first film on the programme was Log Jam. A short comedic piece from director Alexei Alexeev. In total we saw 3 different Log Jam shorts during the screening, but the first was by far the funniest and won the audience over with slapstick humour. Log Jam featured 3 woodland creatures (a bear, wolf and rabbit) who were rehearsing some avant-garde jazz. The designs of the characters were basic, but in keeping with the brilliant and perfectly timed comedy of the short.

Crocodile (an Estonian animation from Kaspar Jancis) took on a different approach. A longer animation with a hand drawn style, we are told the story of a singer who loses his job and finds himself in the company of a woman and a crocodile. Offbeat comedy and a surreal setting were combined to create a short which engaged the viewer with a weirdly fantastical story and an ambiguous conclusion. The comedy was not slapstick, but more in the surreal vein with the loose pencil sketch style adding to the beguiling fantasy. 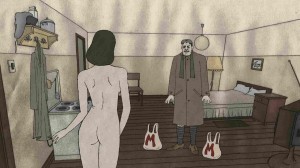 Wind Along the Coast (Directed by Ivan Maximov) was a Russian animation, again with a hand drawn style, that told the story of a variety of characters on an island that is plagued with windy weather. Interesting character designs and the amusing setting made this the perfect companion piece to the previous short in the collection, but stood out with the vast array of characters. 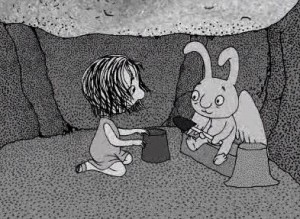 The tone of the Animated Shorts strand dramatically changed and highlighted the diversity of the Manipulate Festival. A French animation by the name of AAlterate (from director Christobal De Olivera), took us from the storytelling of the previous shorts and presented a CG animation that utilised the medium to take the viewer on a visual journey. AAlternate was a masterclass in highly detailed 3D modelling where we see a car being destroyed and eloquent transitions between what appeared to be non-sequitor images. These images, combined with the pulsating soundtrack, created a sparse and stark landscape, leaving the viewer perplexed but intrigued. 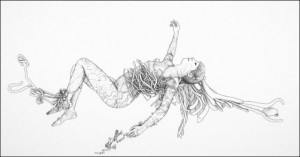 Welcome to Kentucky (Directed by Craig Welch, USA) and Nightingales (Theodore Ushev, Canada) both highlighted the diversity and quality of the screening, but the standout piece was a Canadian animation buy the name of Madame Tutli Putli (Directed by Chris Lavis and Maciek Szcerbowski). Here stop motion and CGI was combined to tell the story of a lady who reluctantly finds herself on a fated train journey. Madame Tutli Putli seemed to push the boundaries of the medium by taking stop motion into the realm of the surreal and creating a world populated with menacing characters. Although this approach is not new, the short was kept fresh with original character designs and a unique setting, that fell between steam punk and Hitchcock. The train itself was claustrophobic, with our protagonist crammed into a small compartment with a former tennis player and a pair of business men trying to play chess. The claustrophobia is emphasised when the tennis player awkwardly propositions Madam Tulli Putli and her fascinating and treacherous journey begins. What makes the short so compelling is the lack of dialogue, with all the emotion being conveyed through actions and the dramatic soundtrack. The characters come alive through the animation and the tension is drawn through facial expressions and sublime animation. 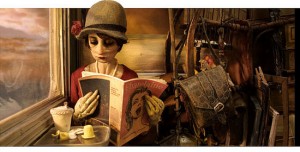 The penultimate film (the final being a further Log Jam short) was Fast Film (an animation created in 2003 from Virgil Widrich) which can only be described as truly original and mesmerising. Making use of classic movie footage, edited together and then animated in a paper cut out style, the visuals were dazzling and complex, but the linear storyline keeps the audience on track. Characters are literally removed from a film strip and edited into a new world made out of photographs and classic movie scenes. The story itself follows the typical adventure mode; with a damsel in distress, a macho hero and a variety of monsters and villains. At times it is easy to forget the Fast Film is actually an animation as all the footage is derived from live action, however the imagination and originality of the visuals ensures Fast Film can be regarded as a classic of the medium. 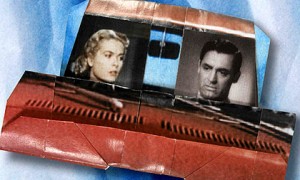