Paper Cinema create theatre that is absent of actors and dialogue. Instead the make use of live illustration, paper cut outs and comic book illustrations, augmented with a dazzling live soundtrack and creative foley sounds effects. Appearing as part of the Manipulate Visual Theatre Festival at the Traverse Theatre in Edinburgh, the audience is told  Homer’s classic The Odyssey in a unique and quirky style. 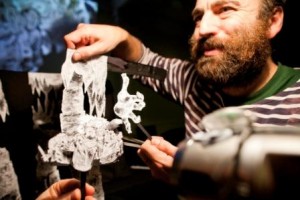 The familiar story is told in an unfamiliar method that is truly dazzling to watch. On the stage we have 5 performers. 3 of which make use of a variety of instruments (including electric guitar, violin, drums an mandolin) to create a whimsical soundscape, meanwhile the other 2 performers are situated in front of a video camera. To the back of the stage is a screen in which the visuals in front of the camera are projected. These visuals are paper cut outs of the various exuberant characters and landscapes that Odysseus encounters as he returns home from the Trojan War. The performance begins in true cinematic style with a long title sequence. This is conveyed to the audience via an illustrator drawing various characters onto a page which is videoed and projected onto the back screen.

The audience is apparent to the tricks that The Paper Cinema use throughout the performance. They can see the performers and the paper cut outs on the stage, waiting to be used. This however does not distract or dilute the performance, in fact it adds to it. The audience tries to guess what will be held up in front of the camera next and is always surprised and taken aback by the innovation and imagination, as the graphics are moved and animated with grace and style.

Despite being small in size the paper cut outs feel large and presented in a vast 3D environment. Making use of perspective and movement, the performers skilfully manoeuvre the illustrations back and forth in front of the camera as the audience suspends their disbelief and is transported into a unique comic book fantasy world. 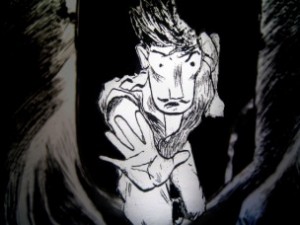 The Paper Cinema also make use of the playful nature of their performance by adding comedy and exaggerated sound effects. Odysseus can be seen desperately travelling on a speed boat and even though we are being told a classic tall, it is within The Paper Cinema’s rules. The main rule here being fun.

Sometimes the story can appear second to the stunning illustrations and presentation, however The Paper Cinema never loose site of their audience and always have design, innovation and creativity at  heart.