Caterham have today launched their new Formula 1 car in Spain at the Jerez circuit. F1 designers are not looking for beauty per se, but as we have mentioned before, beauty is an unavoidable result of the successful singleminded pursuit of an idea. The CT03 is pictured below. 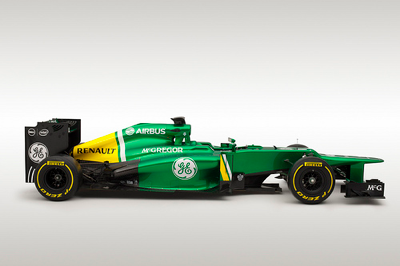 The team colours have been lightened, keeping the familiar yellow and green but changing the shade. That in itself will probably not contribute much to the top speed of the car, but other developments will affect performance, such as the undercutting of the sidepods and major changes to the diffuser and engine cover. This is the first car produced by Caterham at their technical centre and is an evolution of the previous CT01 model. It has even kept the aesthetically controversial stepped nose that other manufacturers have hidden behind vanity panels.

New driver Giedo van der Garde said after the first day’s testing that ‘…compared to the car I drove in Brazil it feels like we’ve made some good progress over the winter,’ and team principal Cyril Abiteboul declared himself pleased with the response to the new car.