Over the centuries drama has covered a multitude of topics, but there remain certain subjects you don’t expect to see mixed into the same plot. For example, Basque Separatism and cricket haven’t yet been made into a hit play. Poetry and boxing are another improbable pair (or maybe not…)  Until last night TV talent shows and Islamist extremism were another unlikely combination. But not anymore.

Pole Factor, written by Nazish Khan takes X-Factor and Islamist terrorism and jigsaw puzzles them together. These are two features of the 21st century, and combined with the characters’ obsession with Twitter followers and hashtags make Pole Factor an unusual snapshot of contemporary British life. 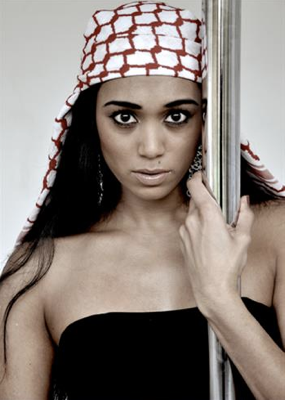 Directed by Bernie C Byrnes, the play is part of the Vault Festival which runs until 8th March at The Vaults, Waterloo. Approached through an area set aside for legal graffiti, the venue exudes artiness and experimentation. With several performance spaces and a multitude of events, it is ideal if you like your culture raw and unedited.

In Pole Factor Reena Lalbihari plays Sameera Mohammed as an independent, feisty young women. She is competing on an X-factor style programme for Pole dancing on which she competes under the name Coco. She has reached the final selection along with Fiona McGee’s bubbly-but-calculating Gina. There is no emphasis on any Simon Cowell-type judgements, and very little pole dancing. Instead we see the background of Coco’s life, with her boyfriend Max (played by Ian Baksh) and his old-friend Hanif.

There is tension between the extreme celebrity-obsessed Western lifestyle that Coco has chosen and Max’s moderate Muslim views. The unwitting absorption of unfortunate Western mores by both characters is demonstrated by their unquestioned use of Christian blasphemies.  Farhan Khan plays Hanif, a muslim who did love football but has been radicalised in prison. Khan makes Hanif’s new beliefs completely real, to the point that I briefly wondered whether the playwright would really push artistic boundaries and end the play in a real onstage suicide bombing. I don’t think it’s a spoiler to say she didn’t.

Hanif is trying to start a new radical mosque. Whilst disapproving of Coco’s life he hypocritically tries to use her new fame to bring attention to his project. Providing the counterpoint to Coco’s Westernisation, we have three characters with different levels of integration with non-Muslim society. Their different attitudes and concerns take us on a journey that in précis would sound unlikely, but shows the pressures that people are under to conform and the actions they take to try and live with the different influences they are under.

On a practical level, much of the action took place low down on the right of the stage. With only slightly raked seating on the same level as the stage, as soon as the actors sat or kneeled down they were almost completely hidden from my – and no doubt many people’s – view. Nazish Khan’s writing is generally tight and though she is writing about serious and controversial material she manages to inject several moments of humour. At times it appears she puts too much of her own knowledge into the characters. When one pole dancer makes a literary reference it is surprising, when the other namechecks The Catcher in the Rye it feels out of character.

The changing face of the media is examined as it moves from supporting Coco to blaming her for the events that happen. The way that it changes its references to her is telling – in the same way that it is claimed that Andy Murray is British when winning and Scottish when losing. Whilst she is the media’s darling she is Coco. When they turn on her they revert to her real name Sameera Mohammed.

Fifteen years ago the multimedia projections of the hashtags people are using on Twitter would have been impossible – ‘The what-tags?’ we would have asked, closely followed by ‘What’s Twitter?’ Today they help make the play a relevant study of some of society’s current pre-occupations.

Pole Factor continues every evening until 8th February at 7.00pm.

Details and to book