With the 70th Anniversary of the end of WW2 and The Imitation Game film igniting further interest in Alan Turing trying to crack the enigma code Relay, Catrin Morgan’s solo exhibition based on Morse code, military intelligence and domestic space, is perfectly timed for the newly intrigued and the history aficionados.

‘I worked as an artist but never really found it satisfying – my work was too illustrative and I was more concerned with narrative,’ Catrin Morgan.

This quote highlights how art isn’t just about letting oneself go in heady freedom but how sometimes it is necessary to provide structure. Catrin not only limits her field to the interplay between communication and domestic space but she also requires the structure and flow of narrative. In these self-imposed restraints one has a limited area of focus, which in turn allows for an in-depth analysis.

Dalla Rosa is a small, light gallery dedicated to mid-career artists with a specific focus on paper as a medium. Catrin and the gallery fit together naturally; paper has long been used as a medium to communicate narratives. The walls are sparsely scattered with Catrin’s precisely placed, monochromatic work. It currently has the feel of an architect’s office rather than a gallery.

The most fascinating exhibits come out of conversations Catrin had with a friend’s grandmother, Margaret Horsman. At the age of 17 she signed the Official Secrets Act and began working in signals intelligence at the outbreak of WW2. Morse code became a second language to her. According to Catrin, Margaret was employed to listen to German officers and she got to know them so well that she could tell which one was it was through intercepting their Morse code. Morse code had become so entrenched in Margaret that after the war she could hear it all around her in her daily life, including in birdsong. 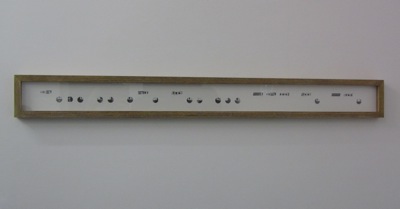 In the three exhibits relating to Margaret’s experiences Catrin uses the dots and dashes of Morse code to reveal domestic settings. Each work uses different size Morse code to reveal an image. The largest of the Morse code drawings is Birdsong where Catrin has interpreted Margaret’s birdsong through drawing with graphite pencil. The paper is encased in a long, slim, wooden frame hung horizontally, measuring 10 x 118.9 cm. Each dot and dash is a miniature window into a domestic setting. Birdsong depicts a row of houses which includes one person outside who we only see the head of. Viewing the scene through a form of communication specifically used in war holds an element of mystery and secrecy which echoes its darker spying nature. The view of ordinary houses remind the viewer of the reality and lives behind this abstract looking code. Its window-like structure makes the viewer a voyeur and combined with the historical use behind Morse code it can make one feel slightly uncomfortable. Yet, not so uncomfortable that one find oneself on tiptoes, with a slightly bent head to see if that portal could reveal just a tiny snippet more.

Birdsong has a musical flow about it. As one’s eyes gradually move across the paper, lightly flitting up and down following the dots and dashes there is a sense of not just birdsong, but bird movement – as if the viewer is seeing from a bird’s perspective. This particular piece contains a vast amount and yet the more one looks the more one reveals. It’s illustration with not just a narrative but a complex, layered, historical and personal narrative. While looking at this piece, and whatever else the viewer may take away, one still remembers the passionate and inspirational grandmother, Margaret Horsman.

1042 Bletchley Park Mansions is a 30 minute animation which is a light image projected on the wall (although it is a piece in progress ‘…and will become an algorithm capable of generating all of the mathematically possible permutations of Bletchley Park mansion.’ dalla Rosa website). Bletchley #1043 is an edition of 10 blue rubber stamps on a piece of grey paper. Both these works are showing how a domestic space can be disrupted. Bletchley has become forever associated with code-breaking and monitoring. These two pieces are more ordered and mathematical and have a strong architectural feel to them mirroring the reconfiguration of Bletchley and the mathematical elements to code breaking itself. 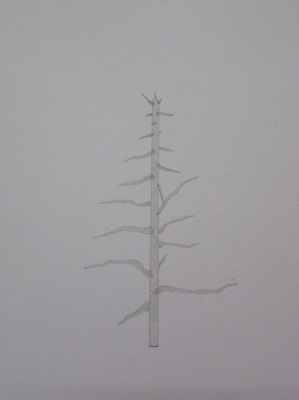 from Numbers Stations by Catrin Morgan

The piece which physically stands out the most is Numbers Stations. It is comprised of 161 postcards, each with an understated yet intricate pencil drawing of a transmitter. A teal painted wall (the only bright colour in the gallery) backs the work and provides emphasis by giving the white card something to stand out from. Again, ordered and laid out in what seems like empathy towards the OCD among us, Numbers Stations has 16 rows of 10 cards standing on a black shelf in portrait. They are related to different unexplained radio communications which have been traced by amateur radio enthusiasts. Some of the communications could be radio stations and some could, ‘be interference from radar or sounds (such a birdsong)’ dalla Rosa website. The postcards depict receivers such as washing lines, crosses and general electrical pylons. Some of the more unusual and comical transmissions include French Lady, Bored Man and Saxophone.

Each set of postcards holds a different narrative story which once again begs to be delved into more. Catrin and dalla Rosa have produced a simple, ordered and precise exhibition which holds layers upon layers of information concerning the relationship between communication and domestic spaces. This show also has a general feel of the unfinished, meaning that Catrin has not wrapped a neat parcel and sent it to the viewer to open and say ‘oh, how lovely’. She’s given the mother of all pass the parcels and after one treat is exposed there is another layer to tear away. This may come from her deep interest in research and narrative and I imagine she’s unknowingly inviting us into this world of exploration, because once you’ve stepped out of this exhibition it doesn’t end. No, not a sequel, but an opportunity for further exploration and more than likely a topic for travel daydreaming and general pondering. Catrin has achieved what many artists strive for: technical skill and the ability to make people think and continue to think.