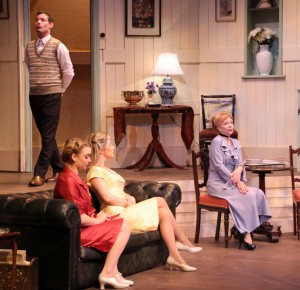 Agatha Christie has managed to stay popular despite her anachronistic English village domain. Audiences and readers still adore her labyrinthine plots. Ian Dickens’ touring production of ‘A Murder Is Announced’ is the latest adaptation.

From the outset it is unmistakably the nineteen fifties and to be more precise, 1953. A notice appears in the Chipping Cleghorn Gazette stating rather oddly ‘A murder is announced and will take place… at Little Paddocks at 6.30pm’. This soon fires the curiosity of the villagers and Jane Marples. All gather at Little Paddocks, the home of Letitia Blacklock. At 6.30 precisely, the lights go out, someone fires a gun, and a murder has occurred.

A fitting introduction to an ingenious spider’s web of deceit and plot twists. Just when you think you have cracked it, there is another startling revelation to add to the complexity. Sadly, when it gets to this point, exposition too often gets in the way of dramatic tension. On a few occasions, there were forced efforts to get through as much dialogue as possible to clarify the narrative.

Despite this minor hurdle, all the actors worked well together. Of particular note were Katy Manning as Letitia Blacklock and John D Collins as Inspector Craddock. Both dominated the stage with dramatic presence. Geraldine Newman probably had the most challenging task in bringing anything fresh to the role of Miss Marples. As a result  she was so often overshadowed.

As one would expect from Christie the plot is ingenious and taut. Moreover, despite its focus on death, it is also witty, extremely gripping, and satisfyingly entertaining. It left the majority of audience guessing to the end. We see very little of this kind of work since the demise of ‘rep’. The fact that this house was full and the production is selling out demonstrates that there is a demand for these popular plays. I hope that we will see similar in the future.

Brought to the stage by Ian Dickens Productions

Reviewed at The Haymarket Theatre, Basingstoke part of Anvil Arts.