The viewer is presented with a photographic exhibition that showcases a voyeuristic insight to a party given by Andy Warhol to his friend Jospeh Beuys. This in itself may not seem worthy of an exhibition in its entirety, however Beuys relationship with Edinburgh and the ongoing interest in his and Warhol’s work, makes the exhibition intriguing within this context.

Joseph Beuys was a German Fluxus artist who was famous for Happenings, Performance Art and Installations. He was a regular visitor to Edinburgh where he exhibited his work and gave 12 hour long lectures on politics and art, during the 1970’s. These events occurred at the old Demarco Gallery in Edinburgh. Beuys himself also has another exhibition at the Summerhall galleries (Small Social Sculptures – An exhibition of Joseph Beuys’ Announcement cards) and the Demarco archives are held within the Summerhall Venue, so the context of this exhibition is very much set up to further showcase Beuys and his relationship to the city of Edinburgh.

However the exhibition is removed from this. Colour photographs give a sincere, candid and almost behind the scenes look at an evening with Beuys and Warhol, while a video takes the viewer further into the party, showcasing the joyful atmosphere and this is a far cry from any of Beuys’s previous associations with the city of Edinburgh. 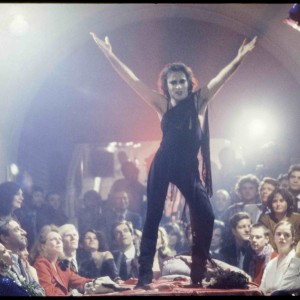 Beuys was a contemporary of Andy Warhol who arranged the party for his friend, whilst in Italy. Warhol himself did prints of the German artist, who was very much the antithesis of the shy American artist. Beuys is of course famous for his 12 hour lectures and was more extrovert and gregarious. In one of the photographs we see Warhol explicitly present this relationship. He silently sits at a dinner table, while a transvestite performance artists (Renato Zero) gives Beuys a bouquet of flowers. Beuys is not phased by this and can be seen laughing and getting into the party spirit.

Overall the photographs do little to change anyone’s opinions of either Beuys or Warhol, they are neither explicit or graphic enough. However if you are familiar with either artist – The ‘Lost’ Photographs – will give you an intriguing insight into their relationship and make you wish you were there that evening.

The photographs within the exhibition were purchased after they were spotted on Ebay via an Italian seller. These images have their world debut at this exhibition and are definitely worth a view whether you like the artwork of the subjects or not.