5 performers take the stage to create the cartoon like visuals. The characters are puppets, where they are mostly mastered by two of the performers. One performer wears a three feet tall body suit and their hands take over the feet, while their face is equal to the face of the character. However behind this performer another member of Vox Motus stands with their arms through the sleeves of the puppet suit, taking over the hands of the character. The characters feet stand on a table and we are given a miniature puppet world that is populated by Malky, his parents (Steven Rae and Angela Darcy), their landlord Jerko (Harry Ward) and his mother Mrs Dreich (Jo Freer). Each character is fuelled with anger and lives in a grubby unappealing apartment block, that feels almost as cold as Malky’s parents. 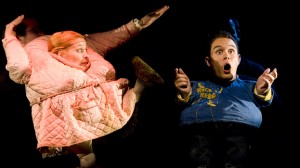 Jerko is looking to evict Malky and his family, while Mr Dreich lives at the top of the apartment building where she suffers from a variety of ailments. Malky himself is a young venerable boy, who is unloved by his parents and just wants a helmet so he doesn’t injure himself while riding on his skateboard.

The absurdity of the Slick continues throughout the performance and climaxes when the landlord discovers his residents have found oil underneath his apartment. Slick then turns into a violent war between Malky and his family along with the evil and tight fisted Jerko.

What is not absurd is the set design. There are two tables to the front of the stage that the characters have their feet on. These tables unfold to reveal the different interiors of the apartment building (a living room, bathroom and an opera house in a humorous dream sequence), along with the exterior that Malky has to navigate to steal an oil sample from his landlords toilet. This inventive construction is definitely the highlight of Slick and engages the audience by having them guess how the tables will be constructed to reveal the story in inventive and fascinating ways.

The climax of the story removes the tables and the previously unnoticeable back drop is deconstructed to create the roof of the apartment block. Here a standoff occurs, with our brave protagonaist Malky having to prove his worth. Malky is a reluctant hero, but his innovative character design and the exciting adventure story makes him an endearing character that the audience warms to during the 70 minutes of the production. 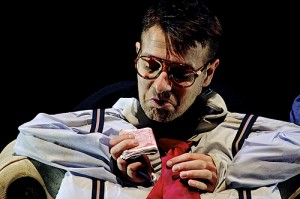 Staged as part of the Manipulate Visual Theatre Festival at the Traverse Theatre in Edinburgh, Slick goes on tour through Scotland in February and March and into Wales and May. Tour dates can be found on the Vox Motus website. Slick is definitely an absurd and enjoyable way to experience intuitive puppetry.