Sir Anish Kapoor RA, Venice Biennale representative and Turner Prize winner has caused a stir with his exhibition at the Lisson Gallery.

This show of new works is claimed by the gallery to be his ‘radical return to painting’, the big talking point being the large scale works representational of twisted, sinuous flesh. Onlookers whisper the words ‘vulgar’ and ‘disgusting’. I overheard one visitor asking an invigilator how she could bear to be in the same room as the work, another laments about Kapoor’s departure from ‘nice’ art. 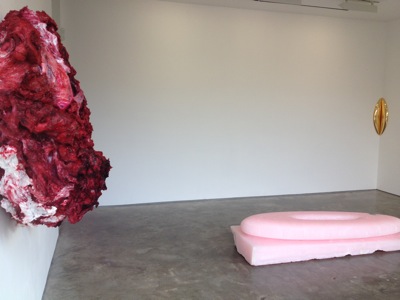 Protruding near to 2ft from the wall these are not two-dimensional paintings, they are sculptural objects and a clear progression of his red wax series. Not particularly a huge departure or radical evolution and almost certainly not painting. Up-close these works are a heavy mess of resin, silicon and pigment, highly textured and deeply coloured with no suggestion of figurative form. Take a few steps back and the work becomes an undeniable illustration of torn flesh, fat and gristle, although still without figuration. These are not representations of butcher’s cuts, they are violent illusions of meat. This is shocking because firstly, it is far from supermarket’s homogeneous sterile meat portions that we are used to, its brutal and fresh looking and the fact that people have squeamish reactions to it is credit to the execution of the works. Secondly these works are made more gut-churning as they are punctuated by other sculptures, soft and smooth and gentle. They provide a strong contrast to the aggressive meat pieces yet their shapes are still ‘of the body’.

Kapoor uses Pink Onyx for the first time in his work and the result is two objectively beautiful sculptures suggestive of intimate human body parts. A further two reliefs (in the style of his hugely popular polished-metal pieces) sensually shimmer gold and are unquestionably vaginal. Their mirrored image warps and distorts the gallery and reflects the viewers back at themselves.

Gruesome meat has been done in art; Rembrant, Goya, Bacon, Hirst. It shouldn’t shock us but the scale and textures are provocative and affecting. The consequence is an awareness of the body and a consciousness of our psyche’s reaction to the different representations of the body. The works can been seen as a portrait of the physical and psychological human. It is an effectively realised concept and makes for an extraordinary exhibition.