Art aficionados, culture vultures and unashamed aesthetes flock to Paris to see some of the best art in the world. From world class paintings, sculptures and architecture the city is bursting with top museums and art galleries – however, let’s not disregard what lies beneath the cobbled city streets.

Travel experts at the Paris Pass have gone underground to uncover the true beauty of Paris’ metro stations. From original art nouveau entrances, to cleverly curated platforms, the Paris subway system is a network worthy of much more than getting from A to B! There’s plenty to appreciate in terms of art and culture, so take your adventures to another level: under the busy streets of the French capital. 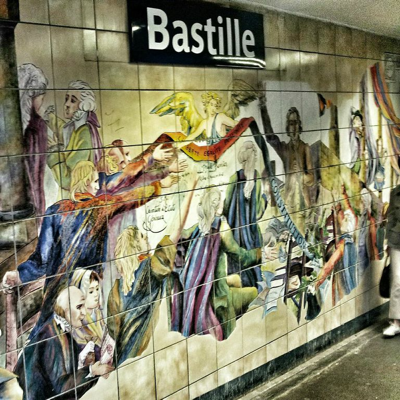 Step back in time and learn a bit about French history at Bastille station. The walls were decorated in 1989 by Liliane Belembert and Odile Jacquot to celebrate the bicentenary of the French Revolution. Standing on the platform, you can see the five frescoes depicting historic French scenes – almost like something out of a museum. Bastille is famously the site where the prison was stormed on 14th July, marking the start of the French Revolution. Hop off at this station if you want to see the Bastille Basin, too, a charming little boat basin linking Canal Saint-Martin to the River Seine.

The Louvre is arguably one of the most popular attractions in Paris thanks to its vast collection of art works. Welcoming over 9 million visitors a year, it’s not surprising then that the Paris underground had to reflect the style and stature of this renowned museum. Built in 1990 at the same time as the new glass pyramid, the Louvre-Rivoli metro station is lined with replica art works to echo the pieces within the museum itself. Although this station no longer provides access to the museum itself, visitors passing through on Paris transport can still admire the uniquely curated platforms. Palais Royal-Musee du Louvre on the other hand is the Louvre Museum’s main metro station now, which is another must-see on your metro art tour. The unique Place Colette entrance is made from multi-coloured glass baubles and well worth a look.

Pont Neuf is ironically the oldest bridge in Paris, although its name ‘new’ suggests otherwise. Built in 1607 it’s one of Paris’ most popular landmarks and favoured by visitors taking a romantic walk across the River Seine to the Île de la Cité to visit the Notre Dame and Sainte-Chapelle. The theme of the Pont Neuf Paris underground station represents the Monnaie de Paris (Paris Mint) just around the corner. You’ll see along the walls of the platforms are large replicas of French coins, as well as display cabinets and scales for weighing money. 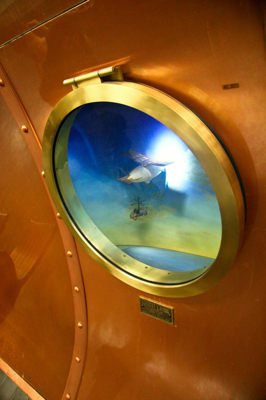 You definitely won’t have seen anything like this station before! Vaulted and clad completely in copper, the Arts et Metiers station was designed to feel like a submarine, complete with portholes and exposed bolts. The Arts et Metiers (Art and Craft Museum), just above contains some of the most fascinating displays of technological evolution, including vintage cars and planes, as well as Foucault’s pendulum. The Arts et Metiers station, whose redesign was based on the writing of French novelist and adventurist Jules Verne, is a great reflection of the museum itself – leading you into the wonderful world of artistic creation and invention.

Concorde is one of the big interchanging stations in the Paris underground, linking lines 1, 8 and 12. It’s the main station to head towards if you’re planning on visiting the Orangerie Museum or walking up the Champs Elysées. Opened in 1990, it is one of the most recognisable stations in Paris thanks to the walls of the line 12 platform. The artistic genius behind the décor was artist Françoise Schein who covered the tunnel with lettered tiles all spelling out the 1789 Déclaration des Droits de l’Homme et du Citoyen. Trying to spot as many words as possible before the train pulls in is a wonderful way to pass the time! Did you know Ezra Pound’s 1912 poem In a Station in the Metro was inspired by this Concorde station, as well?

As one of only two original art nouveau glass canopies, or édicules (kiosks), left in Paris, the entrance to the Abbesses Paris subway station is something to be admired. Built by Hector Guimard, the entrance was originally covering the metro at Hôtel de Ville, before it was moved to the picturesque area of Montmartre, home to the Sacré Coeur, in the 1970s. You might also recognise the station (and the area) if you’ve watched the popular cult film Amelie, too. Abbesses is the deepest metro station at 36m under the pavements of Paris and as you wind your way down the stairs to the platforms you’ll be able to see the brightly coloured murals and graffiti-covered walls which, in itself is something worth seeing.

It’s safe to say that if you depart on an art tour of Paris you’ll be just as likely to find inspiration from what’s below ground as what’s above. As you go from one iconic Paris museum to the other, make sure you go by Paris transport and you’ll see some real authentic art and architecture as you go. Celebrate the old and the new from original Art Nouveau structures at Abbesses, to symbolic displays of the French Revolution at Concorde and Bastille, an event ingrained in Parisian culture and history. Take the time to discover the beauty of the Paris underground – it offers so much more than just stations!

The Paris Pass is the ultimate sightseeing package which provides access into over 60 world famous museums, art galleries and monuments in Paris. Made up of the Paris Museum Pass, Paris Attraction Pass and Paris Visite Pass, it could be purchased for 2, 4, or 6 fixed day durations. Discover and explore Paris the easy way with the Paris Pass.