Finally Yoko Ishiguro is back to London! I couldn’t resist asking her a few questions. 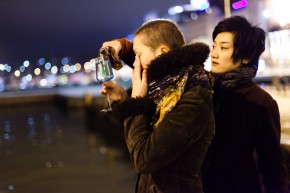 Alessandra Cianetti: You are a live artist and actress with a composite education that started in Japan, were you studied psycholinguistics at the University of Tsukuba, and went on in London, where you completed a MA in contemporary performance making at the Brunel University. How does your work reflect these different backgrounds?

Yoko Ishiguro: First of all, I need to mention when I studied those different subjects. I did them in quite different periods in my life.

I studied psycholinguistics between 1997 and 2001 in the department of Japanese Language and Culture in the University of Tsukuba. It was when I was about 18 years old, just started to act on stage in a student theatre club and had no idea that I was going to be involved in the world of performance so deeply. In fact, I chose that department to become a Japanese language teacher. However, my interest shifted to psycholinguistics, which deals with how we acquire language, how we process language and recognise the world and ourselves, how language disorders occur and how to remedy them. This explanation might be wrong. Sorry, it was more than ten years ago I studied this subject. Anyway, I have been interested in the second topic very much –how we recognise the world and ourselves by means of language. The shift actually happened when I started acting and I had to deal with various kinds of languages (verbal/nonverbal, written, spoken, foreign, gestural, etc.).

I studied in the MA course of Contemporary Performance Making at Brunel University in 2011-2012, after I experienced a number of international performance events in various countries and established my identity as a performer, working across Japan and the UK.

I have to admit that Psycholinguistics still fascinates me so that a big part of my performance pieces are devoted to the experiments of the physical/mental distances between audience and performers, and the verbal/nonverbal communications in different social situations. So, in a way, I am still haunted by the ghost of psycholinguistics.

AC: Last year I experienced your solo performances at GATE F at the Stoke Newington International Airport in London. Two pieces in which you engaged only one member of the public at a time. A powerful experience in its building of an intimate, temporary and deep relation with a stranger. How do you relate to the audience in these pieces and what is the role of the public in your work?

YI: Thank you for coming to experience my performances! As you know, in GATE F, I performed two one-on-one pieces, ‘Flashes’ – the photo session in a dark room where you can see me dancing only when you take photos with the flash light on the digital camera– and ‘It doesn’t matter if it’s actually raining or not…’ – the rendezvous under an umbrella with the rain-dropping-on-the-umbrella sound from a portable audio player.

That style – one audience member and one performer at once – is called ‘one-on-one’, ‘one-to-one’ or ‘micro’ performance and is especially popular in the live art field in London. I have been very interested in this style since I started to question the scales of performance: does the size of the audience necessarily measure/correspond to/indicate the quality of a performance? I remember that I had approx. 30 audience members in my first performance in Yokohama in 2007 and to be honest, I thought it was a big enough number of people for me to feel and to be fully responsible of. Soon after, I was invited to some performance art events outside Japan where performance artists were showing their works not to entertain the audience at all but purely to practice their political activities. I could not help but ask myself what the ‘right’ attitude towards the audience is and what such a thing as ‘performance’ is, which only exists in the complex demands, supplies, expectations and misunderstandings between audience and performers. I do not have any answers yet. However, I found that the one-on-one performance style is very helpful for my research on the people called ‘audience’ because I can get close to them and observe them – while I am also being observed by them very closely.

As for the closeness and distance itself, I have been interested in the distances between persons in general. The distances can be physical, mental, emotional, social, mediated, or a combination of these. One-on-one performance is such a simple style of communication, that is associated with many different social occasions such as relationships between mother and the baby, lovers, a doctor and a patient, facebook friends who have never met each other, a victim and an attacker, etc., and this gives me the space to make playful experiments.

The role of the audience of my one-on-one performances is to get involved in a kind of a laboratory to create a language that is only possible between each of them and me in a particular situation with an unusual physical/mental distance between us. They need to follow the structures, which gives them little freedom, but they can play, contemplate, make the invisibles visible by using every single sense they have. I try to read what they are thinking and they try to read what I am thinking. There, a subtle movement of eyes, for example, has a big meaning. So far, it is much more interesting, thrilling and horrific to deal with one audience member close to me than the one thousand audience members sitting back far away from me. 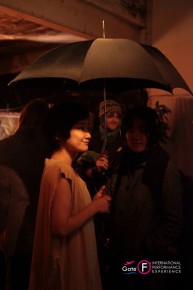 AC: Body, relations, intimacy, personal stories, death are issues you address within your practice. What is your inspiration? What is that you want to communicate with your works?

YI: Body, relations, intimacy, personal stories, death are all highly personal, they all relate to my life and have inspired me a lot. What inspires me is that they are common and necessary for all humans but you cannot access them as the first person or the second person unless they are yours. They are always experienced in the third person style by the others. Especially death is a very interesting phenomenon that we definitely cannot experience as the first person or the second person but always as the third person. It happens to everyone eventually without any doubt but no one knows what it is and people pay a lot of money when it happens. I may want to research this more.

In my performance making, I would like to build a fantasy world with absolute realities. I would like to challenge the dichotomy of facts and fictions, which I believe to be relative and totally depending on how they are documented, presented and seen by whom. Thus, my performance will be realised at the meeting point of fiction –some impossible theories created by me as the third person– and non-fiction –my actual personal life experiences. Therefore, my real life events are important resources for my performance making.

AC: Technology is often part of your performances, let’s think about the steaming channel in ‘R.I.P’. or the sound system for ‘It doesn’t really matter if it’s actually raining or not…’. What role does ready-made technology have in your work?

YI: Technologies occupy a great part of my life; enough that I cannot ignore them in my performance making anymore. Here, my aim is to question how they affect our sense of distance and proximity.

In ‘R.I.P.’, I attempted to make live performance for the sake of the Internet live streams and its documentation. This may be a good example of my challenge of physical distance and proximity, and time gaps. As for the audio I employ in ‘It doesn’t really matter if it’s actually raining or not…’, it is simply a mixture of natural rain sounds I have recorded in different places around the world. In one-on-one performances, I often use earphones and portable audio players since I often borrow the audience ears as my performance space. Ears are tremendously sensitive and intimate parts of our bodies and earphones function to occupy our recognition of the world and create some instant virtual realities. I am interested in their minimal but powerful and even brutal effect.

AC: Talking about technology, at the moment you are performing in Dissolved, a Station Opera House’s production that from 6th to 22nd March is presented at the same time both in London and Berlin and that allows actors and public to be in ‘two places at once’. How would you describe your experience as a performer in this groundbreaking piece where people and objects are ‘both tangible and unreal’?

YI: I appreciate that Julian Maynard Smith, the artistic director of Station House Opera invited me to this exciting project. I call this performance a 3×3 dimensional sculpture since it happens in two different parts of the world at once, in which three dimensional figures are virtually merged into one. As a performer, I have been enjoying myself in the confusion of the sense of where I am. As long as I remember, I had been in Akita, the snowiest part of the world in north Japan surrounded by two meters of snow, shoveling hard every morning. After I came to London, there was no need for snow shoveling anymore but a two-and-a-half-hour train journey to get to the rehearsal space every morning. On the way home, I slept on the train and dreamed that I was on the Yamanote-line in Tokyo, going back to my previous home in the east side of Tokyo. I heard the train staff calling ‘Ueno’ and I woke up at Ealing Broadway. My friends in Berlin will come to the show in Berlin to see me in London. I have never seen the Berlin actors in person at all but I feel them very close to me, even closer than the actor who is kissing me on my forehead gently.

This is quite an experience.

AC: You have been presenting works between Japan and the UK for the last few years. What are your coming projects for 2014?