Scotland is famous for many things but the one that can be most easily sampled and enjoyed is malt whisky. There are distilleries all over Scotland, but we went to one of the oldest, the Oban distillery on the west coast of the Highlands. It has stood in the centre of Oban since 1794 when it was built by the Stevenson brothers. The most famous whisky produced here is a 14 year old malt, though there is also a rare Distiller’s edition bottling which finishes its maturing in a sherry cask. We were shown round the distillery by Fergus, who explained each stage of the process in great depth. Tours are open to the public and are very informative. I was almost inspired to make my own whisky, but that turns out to be illegal, so I had to make do with sampling the Oban output instead. 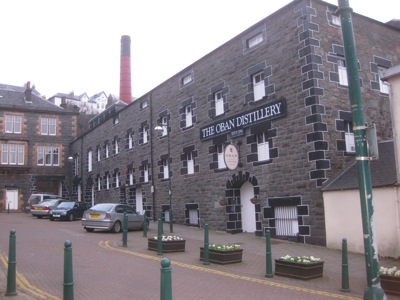 Photos are forbidden in most of the distillery 🙁 so if you want to see the process for yourself you will have to make the journey to Oban. I was amazed how complicated the process is and wondered how on earth it was ever invented. As with beer and wine the monks seems to have been involved – the first written reference to Scotch whisky is from 1495 and mentions a friar called John Cor, distiller at Lindores Abbey.

Since then the procedure has been formalised and mechanised but still involves the same stages – malting, mashing, fermentation, distillation and maturation.  The whisky undergoes a slow distillation in small lamp glass stills before condensing in traditional wooden worm tubs to produce a rich, fruity whisky with a hint of sea salt and peat smoke. These characteristics place it between the dry, smoky Island whiskies and the sweeter, lighter malts of the HIghlands.

There are four key flavours that an expert can discern in Oban whisky. These are smoke, sea salt, orange peel and honey. How exactly the sea salt flavours appear in the whisky is unknown. It is present in the local atmosphere and is just absorbed into the whisky somewhere along the process. The other flavours and scents are more deliberate. To achieve the subtle smokiness the distillery uses malted barley that has been dried in a lightly-peated smoke. The orange peel notes that can be detected on the nose are a result of the long fermentation and contact with copper during the distillation. The honey flavours result from the maturation in toasted American oak casks.

In the maturation room we were shown the oak casks that are used to mature the whisky. These are American bourbon casks with a charcoaled inside which imparts flavour and colour to the whisky. Whisky cannot be called Scotch until it has been matured for at least three years, but Oban’s best known whisky is matured for 14 years. 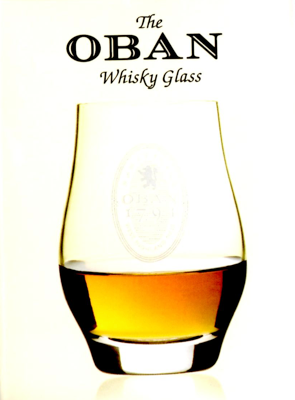 Everyone on the tour was given a small taste of the 9 year old 58% Cask Oban, in a tasting glass that we were allowed to take away with us. This was taken directly from a cask and was much stronger than the final product will be. At the end of the tour we also were given a tasting of the 14 year old malt and were able to try and discern the sea salt and orange peel for ourselves. Scotch whisky would make a lifetime’s study but it was interesting to learn all about the processes involved in making Scotland’s most famous export.

For more details about the distillery and tours click below:

More details are available from the Oban distillery website