You might think that it is fairly amazing just to see pre-war cars being driven on the roads. After all, these are vehicles that are over seventy years old. However there is a group of enthusiasts who not only drive pre-war cars, they race them – at various circuits around the country and the world. The Vintage Sports-Car Club has existed since 1934 and organises a whole season of races for pre-war and historic cars. The ‘Spring Start’ was their first meeting of the year. Held at Silverstone it gave the cars a chance to blow off the dust of a long winter under wraps.

On the weekend of 20th – 21st April hundreds of vintage cars in superb condition filled the Silverstone paddock, arriving on trailers, inside lorries and even under their own steam (Not that I saw any that were actually steam-powered…) Everywhere you looked there were superb examples of old marques and models, with the public able to get close to the machinery and talk to the drivers. The weather was unusually fantastic in that unexpected way that England can suddenly hand out. Months of frost and drizzle were suddenly forgiven as Silverstone basked under bright blue skies.

Saturday had eleven races scheduled in the afternoon, with the morning devoted to practice sessions and qualifying.  It is astounding to see these beautiful cars being taken to – and occasionally beyond – their limits by drivers who are taking part for the love of the sport and the cars. There was also a Bonhams stand showcasing several fantastic cars that they will be selling later in the year at Goodwood. These included a 1934 Alfa Romeo BC2300 and an ex-John Wallinger Brooklands Special 1934 MG NA Magnette. Both were in the check-with-your-bank-manager-first price category but were great examples for aficionados to examine and photograph. 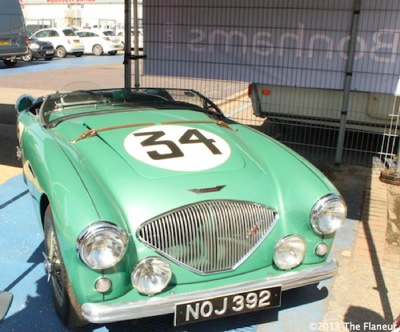 This year the Spring Start lasted two days and had a special race celebrating the racing career of George Abecassis. This was an invitation event that brought together as many as possible of the cars that Abecassis had driven, along with cars of the same model to race against them. The race would last for forty minutes and had a pit-stop so that each car could be driven by two drivers. But that was not until race 10 – there were nine more events to enjoy before the Sports Altas, Aston Martins, HWMs and Healey Silverstones hit the track. 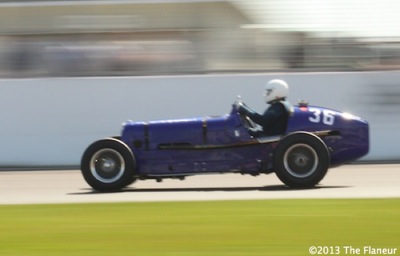 The first race was a short five lapper for pre-war racing and sports-cars to get everyone in the mood. After that was the Commander Yorke Trophy Race for F3 (500) Racing Cars – a twenty-five minute race for 500cc F3 cars. With 36 cars starting the race, pole sitter Steve Jones said it was the biggest grid since the Goodwood Revival.  With entrants from Europe and the USA this was eagerly anticipated and provided entertaining racing for the drivers and the spectators. Steve Jones took the honours in his Cooper Mk10 from Nigel Ashman in a Mk11. 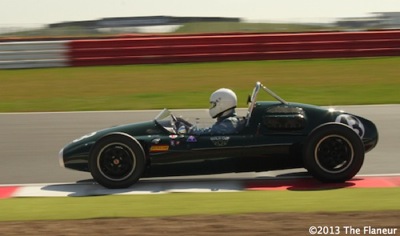 Charles McCabe in his Cooper Mk3

The 20th running of the Patrick Lindsay Memorial for pre-1961 front-engined racing cars attracted a cast of beautiful machines which fought the 12-lap race in glorious conditions. Last year’s winner Philip Walker in his Lotus 16 was always the man to beat, and nobody managed to catch him as he won from pole over a second ahead of Julian Bronson’s Scarab. At an average speed over 80 miles an hour these cars provided a magnificent spectacle as they slowed for Luffield before opening the throttle down the National Pit Straight. 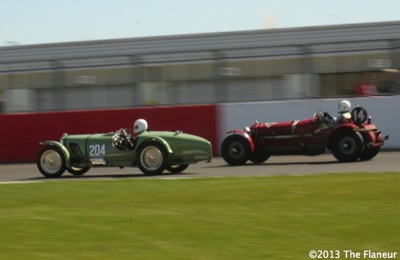 The Historic Grand Prix Cars Association organised the grid for race 8, along with race 4 on Sunday afternoon. Set up to preserve and race the Grand Prix cars of 1920s – 1965 the HSPCA grid was made up of over cars with impeccable heritage. John Harper started in second position but fought his way to take the chequered flag. With an average speed of 91mph these cars still provide exciting wheel-to-wheel action and can be seen at circuits around the UK and Europe all season. 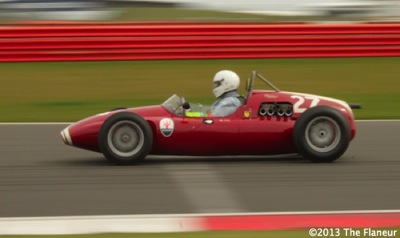 Handicap racing is an exciting way to allow very different cars to race together. Raced over five laps the entrants are given staggered start times, with the last to get away starting 70 seconds behind the pole sitter. If the handicappers have got their maths right all 34 cars in the field should be crossing the finish line 34 abreast! Such a format is a fun alternative to a normal race and allows spectators to see many different cars out on track at the same time. Marshals are kept busy showing blue flags to warn drivers that a faster car is about to overtake. 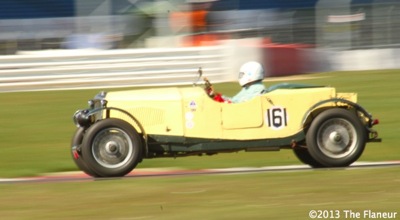 Race 10 was the much anticipated George Abecassis Centenary Trophy. Invited cars were allowed one or two drivers, but all cars had to make a pit stop of a minute’s length, even if they were not changing drivers. Five classes of cars took part which represented the different types of cars that Abecassis himself drove. Lasting forty minutes this was a test of the cars endurance as well as speed. 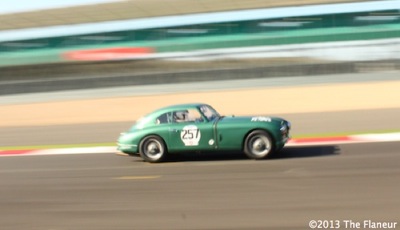 Won by Mark Midgeley and Chris Martin in a green Aston Martin DB3, Midgeley survived a scare at the start when having to swerve around a stalled car on the grid. The rear of the car touched the pit wall, but this didn’t prevent it from averaging 75mph and winning by almost 2.5 seconds. Winners of all classes were presented with laurels – for the cars – and decanters – for the drivers!

The final race of the day – race 11 – included an unusual twist. All drivers had to complete a pit stop, in which they had to change a spark plug with the help of their two-man pit crew! Not actually a race in the strictest of terms, each class of car entered competed against the clock to try and complete a set number of laps. This Regularity Trial was designed to give inexperienced drivers time on the track without full wheel-to-wheel racing. 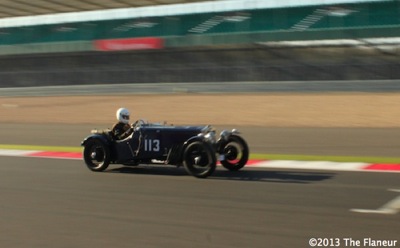 The change-a-spark-plug requirement was a reminder that the Spring Start is a celebration of historic motoring and that it is definitely the taking part that counts. That these cars are still able to hurtle around Silverstone at high speed is amazing. The fact that very few cars left the track at undesignated exit points shows that their handling abilities can still cope well with the Silverstone circuit. 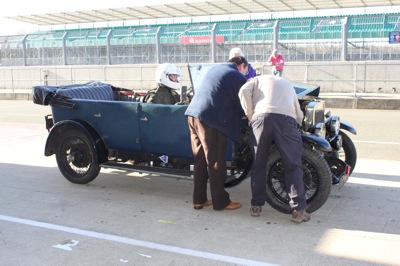 If you are interested in vintage cars then a VSCC event might just be the ticket. Every year they organise over 40 social and competitive events, including races, hill climbs, sprints, road rallies, trials and driving tests. If you’d like to watch an event (or if you’re not sure of the difference between a race , a sprint and a trial), then you can get more details from the VSCC website.