Silvia Alvarez Adalia is a Spanish photographer based in Rome. She has worked for magazines, websites and festivals such as Partiamo Viaggiando, L’Arena di Verona, La Stampa, Oggi, Les Flaneurs and Belvedere#2 International Visual Magazine Festival. Winner of the Roman School of Photography’s prize and the ‘Sustainable Living in Changing Economy’ photography award, she is now working on her new project.

‘Yes, I’m alone’ is an open project that started with the relationship between human beings and cities, transformed into a more complex analysis of the concept of loneliness. Which is the way you decided to cope with it?

Yes, at the beginning my idea was to give the analysis of loneliness a geographical meaning. I wanted to find the element that ‘means loneliness’ in a specific city, an element proper of that city. Going ahead with my research I discovered I was sacrificing the concept of loneliness to find specific city-based shapes of it. In the end I saw the more authentic situations where the more universal ones those couldn’t be related to a city without making the process of capturing images slightly fake. I would have preferred to realise the first idea but I started to feel this attempt vain because every image took me back to the general concept.

What have been the criteria with which you associated the images in each of the six diptych of the first part of the project?

The two images contained in each diptych have obviously a wire that ties them together and strengthen them. I wanted them to express a unique but immediate sensation. I didn’t want to make the viewer looking for the relation between them but I’d like to give him/her the opportunity to enjoy the association. 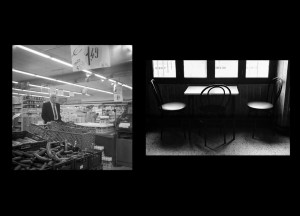 Each photograph is untitled, I image that may not be an accidental choice.

No, it isn’t. Definitely chose a title would have influenced the viewer’s look. In some ways it would have been verbose and a rather pedantic. I have to admit that choosing titles for my photographs is the most embarrassing thing ever!

The digital era won the Kodak but not you! What is today the life of a photographer who works with films? Did you use different techniques to create the dialogue between the pictures in the diptychs?

I started my career with a digital camera, at the beginning I didn’t even considered to use the film both for the tied delivering times I need to submit works that period and for a certain kind of respect close to fear. When I went to a new photography school things changed, that opened to me an entire new world.

Still now I am using digital cameras, but my choice is based on what I want to shoot because in each case the process and the results are very different. In a practical viewpoint, the analogue is now a niche with its costs and difficulties in finding the material that is vanishing and it has long time to get the final results that can’t be easily edited like the digital images. To use film you need to be deeply motivated.

In my opinion the result of analogue cameras is natural and authentic maybe because I am keen on nostalgia. Moreover using film forced me to learn how to deal with a darkroom.

Talking about the dialogue between each couple of photos, as I told before, I wanted the two images connected without being linked to the shot people. I wanted to leave an human element on every diptych without communicate a personal story or a specific situation, because loneliness needed to appear as an universal condition that can happen to anyone everywhere. To achieve that I highlighted the visual difference using two different formats and films.

I am very curious about the series title: ‘Yes, I am alone’.

As I told before, titling photos is the most embarrassing duty for me. I need a lot of time to decide and at the end I often find my title pretentious. If it was for me, I wouldn’t name anything but I understand that it is important like name people. The only way I found to get over this loathing is to choose ironic titles. So I decided to pose a title that sounds like an electoral slogan – the heavy feelings loneliness provokes.

The first part of the project shows only the sad side of loneliness: resignation, lack of affection, separation… By the way, I know that loneliness is not only a negative condition. I, for example, extremely enjoy it as I chose loneliness in order to appreciate some situations and it is fundamental for creative workers.

I am also very interested in the social aspect of loneliness; commonly we feel the need to justify or deny it. Therefore I am developing a second part of ‘Yes, I am alone’ to delve into those positive aspects without missing the continuity of the work that is my first aim.