I’d just got over the shock of seeing an artist drawing caricatures at Silverstone when I walked further into the fan zone and discovered another artist hard at work. Fine art is taking over the motoring world and PopBangColour, or Ian Cook as his parents named him has taken performance painting in a new direction. Using a technique rarely taught at art school the artist creates his works through the medium of the remote controlled car. 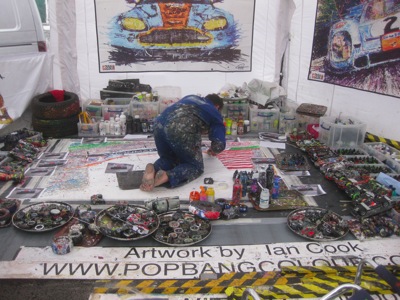 Of course he doesn’t just use remote controlled cars. He also uses full-size car tyres. He was given a remote controlled car for Christmas five years ago and told not to get paint on it. That set in a motion an idea that has culminated in him working round the world, travelling with a suitcase of paint-covered cars. Ian had a fleet of around thirty vehicles at Silverstone as he worked on a painting in full view of the crowds. He owns what must be the UK’s largest private collection of radio controlled cars, with altogether around eighty in his garage including VWs and a Range Rover! 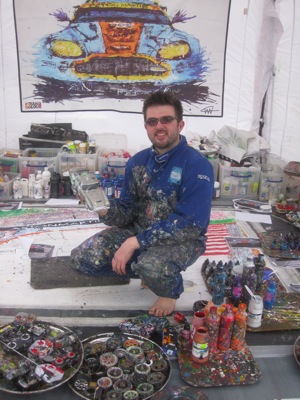 Featured on Top Gear and having worked with big names like Aston Martin and Land Rover Ian is currently artist in residence at the Heritage Motor Centre, Warwickshire. There he has a studio (or garage) in the museum where visitors can watch him working. His creations are a real performance during which he wears no shoes and gets covered in paint. He describes his work as a friendly explosion of colour, and his passion has even reached his real world car, a Chevrolet Spark that he has transformed into a true art car. Used everyday it can often be seen on the roads of the Midlands. There are not many painters who would be comfortable being watched as they create and the performance aspect of his work adds something unique to his practice. PopBangColour has found a way to combine his two loves of art and cars. He often performs at events around the country and if you can get along to see one it is highly recommended.