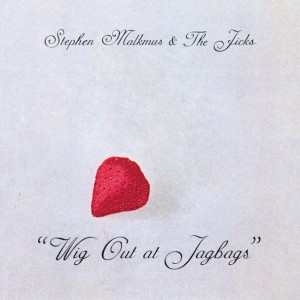 BB: It sounds like there’s a huge number of instruments on the new album Wig Out At Jagbags. Did you have to hire lots of musicians or do you play them all?

SM: Not really. We got horn players – I can’t play real horns…I played some fake ones on a previous record. Yeah wind instruments- you can’t really just pick ’em up, like, the lip thing. I mean, I think you can just kinda pick up drums or piano or at a certain level, and get away with it. Not wind. You gotta get somebody in there. So we got a few people for that, but yeah most of it is just the Jicks and me. If it sounds a little out of tune or off, it’s probably me, the rest is the band.

SM: Yeah you know, simulated instruments, it’s on a couple of the tracks. I played fake strings…most people can’t afford real strings, and it’s hard to make ’em sound good, to be honest. So people just buy these ones, I mean they’re on all the soundtracks or whatever too…I forget the name of it, it has a proprietary thing where it’s so you can’t crack it and steal it, so you have to buy it. You could almost buy a real string section for the price of these sampled strings..but you know, at least you can keep doing it and getting it wrong by yourself, instead of telling somebody else to get it wrong or right.

BB: You drop some unexpected names in songs on the record (Slim Shady, Condaleeza Rice) – is there a reason behind that?

SM: They pop into my mind, those kind of pop culture things. I mean the names are funny, the way they sound, the image that comes in my head thinking about them…so you know, they’re pregnated in some way, but they’re also “lowest common denominator” kind of thing – stuff everybody knows about, people that we know about, interesting in the context of me and the Jicks and what is going on…like “why is he talking about her?”

I mean the name Conda-l-ee-za Rice… it’s a very cool name. I just like saying it, more than anything. So I guess as a vocalist sometimes you get into the melodic sound of words, rather than the meaning.

I mean it’s a hard c…that c-c-c and eeeee-ee…it’s very rock and roll. The leeee-za…it’s like Mick Jagger…I can hear him saying it, that would be awesome…in his prime, I don’t need to hear him sing it now but…or again, maybe he could date her…anyway. That would be cool.

BB: How would you describe your own style of music?

SM: It’s mine I guess, that’s all I can say. People like it because…it’s not ripping anybody else off, you can say that. It’s just like, somebody’s weird mind.

It’s hard to self examine what it is about it, but I would just assume that’s what’s interesting about it (being weird) …because that’s what I like about the people I like, you know, they’re just critters, they’re like, weird people doing their thing. You know, Bjork or whatever, you know she’s weird, she’s a freak, and we love her…

Of course she’s talented, but there’s plenty of talented people. So you know, what makes her better is her kind of uniqueness and balls…but that’s a different story.

BB: Does your music come really easy to you?

SM: Pretty much. I mean a lot of the best things come the easiest out of you…they just come like a flowing river. You just ride it, ride the wave of it you know, you don’t have to think. Things that are more forced for me don’t work, other people, you know like the sweat, and to hear the struggle of something.

BB: You’ll be touring Australia soon. Are you looking forward to playing anywhere in particular?

SM: Sydney and Melbourne, they’re always nice, something’s kind of cosmopolitan about those cities, and they’re sort of timeless. Of course they change, and they change a lot to you, but not to me. And we’re going to Tasmania, I never been there but we’ve watched documentaries about the forest there. It looks really beautiful.