During the performance of SCHIKLGRUBER…ALIAS ADOLF HITLER we are taken to Adolf Hitler’s bunker during the last bleak hours of his life. Told through the medium of puppetry the audience is presented with a dark comedy, where we are introduced to a variety of characters which just happen to be an array of fantastical puppets. Goebbels and his 6 children are depicted along with Eva Braun. The man at the helm is puppeteer Neville Tranter from Stuffed Puppet Theatre and he embodies the characters, giving them style, personality, menace and at times grace. The story is fairly linear, due in part to the audience knowing the outcome, but this is augmented with surreal cut aways to characters representing death and a quick and simple Punch and Judy show. However the Punch and Judy segment does not quite work. Maybe it is the fact that Punch and Judy are typically British and the story we were encountering seems inherently based in Nazi Germany and not the British Isles.

What makes this performance memorable is the articulate characteristics of the puppets. Appearing like Jim Henson’s creations, they are well designed to express their feelings through colour, movement and individual styles. Hitler for example is grey, downbeat and appears on his last legs. Eva is tall graceful, but still has an dark oeuvre that foreshadows her fate and makes her feel cold and despairing, again emphasising the bleakness of the situation but via innovative character design.

The performer himself has enthusiasm, verve and variety in how he handles the puppet characters. Despite the absurdity and the horror in which they represent, Tranter clearly has a respect and love for the puppets themselves and this is obvious in they way he commands them and gives them personality and humour. The stage design is genuinely intriguing, where war paraphernalia litters the stage and a large cog wheel lies in the centre and on occasion is utilised to give independent movement to the puppets. Here we see a dog in which Hitler rides ‘horseback’ adding ridicule to his helpless situation. Tranter makes use of this stage design to bring out the humour of the circumstance and articulate the claustrophobia of the bunker and ultimately present an interesting take on the final moments of Hitler’s life.

Schiklgruber…Alias Adolf Hitler was the final theatrical performance during the Manipulate Visual Theatre Festival 2013 at the Traverse Theatre in Edinburgh and was a fitting conclusion to a vibrant festival. 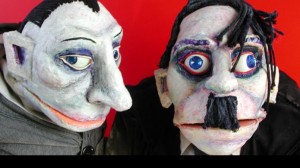