Papercut is a one woman show that is heavily influenced by classic Hollywood cinema, film noir and the films of Alfred Hitchcock. Yael Rasooly is definitely not a blonde Hitchcockian victim, but is in total control of her unique world populated by paper cut outs and an innovative use of objects.

Papercut is the second theatre piece on the Thursday night of the Manipulate Visual Theatre festival at the Traverse Theatre in Edinburgh (The first performance of the evening was After The Wave).  Making use of the intimate space of Traverse Two,  Rasooly is already on stage as the audience take their seats and she is in brash, bullish and confident character. She lashes scorn at the audience for being late, as she sits behind a typical office desk that is our minimal, but effective set design for the evening.

Rasooly is a secretary to a big shot Hollywood producer and she has to put up with his benign and extravagant requests, while putting on a happy facade. Our protagonist’s imagination gets the better of her and the audience is transported into Rasooly’s fantasy world, which is her own black and white Hollywood romance. This however is not a straight forward story. In true dramatic style we are transported into a thriller with a climatic and tragic conclusion.

This story is played out by the actress as she utilises black and white paper cut outs of Hollywood actors and actresses. She takes on the persona’s of the characters and embodies them with passion, vigour, joy and grace.

What made Papercut such an endearing performance to experience was not just the innovation and imagination of the cut outs, but the way in which Rasooly engaged the audience with bitter dialogue, knowing stares and an open and sweet personality. 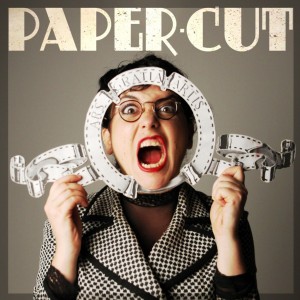