I recently made the mistake of going in the Top Gear simulator. With a name like that I assumed it would be some sort of fun driving simulation, a bit of a wheeze, just the thing to try after a spot of lunch.

It is a machine designed to make you feel as ill as possible as quickly as possible. I write this as a warning to any other innocent souls who may be taken in by the words ‘Top Gear Experience’ emblazoned on the side and think it must be a bit like watching telly. 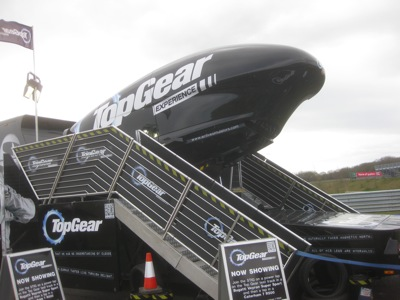 At the start of the ordeal, sorry, fun, Jeremy Clarkson told me there was a button to press on the ceiling. This would stop the simulator.  I glanced up, thinking I would have no need of that. Why did they feel the need to add a STOP button?What sort of person can’t spend a few minutes in a Top Gear simulator? Jeremy announced I was going to be driven around a track in a Bugatti Veyron. Then I’d do another lap in a Caterham.

Excellent. To be honest I’ve never thought that if I had the odd million quid lying around I might spend it on a Bugatti Veyron, but maybe this would change my mind. Maybe the journey would be so smooth and pleasant that from now on I’d find all cars wanting and would pine for a Bugatti.  I waited for the simulation to start, noticed a handrail in front of me and wondered why that was needed.

I was then made very sea-sick, very quickly. It was like seven rough crossings of the channel compressed into thirty seconds. I reached up and pressed the button.

If the Top Gear Simulation had claimed to be a simulation of a rough Atlantic crossing it would have been very good. In that case I would give it full marks. I would direct friends who wanted to be ill towards it. ‘Highly recommended,’ I would say, ‘You’ll come out feeling dreadful.’  But as as a simulation of a luxury car it seems a bit off. If Bugattis really drive like an old ferry struggling not to sink in the Bay of Biscay then someone should be asked if they’re doing their job correctly.

Of course you might love it. If you’re the sort of person who can read in cars and doesn’t mind travelling backwards on trains then hop aboard and have fun. But don’t say you haven’t been warned.