A little confusingly, Contemporary Folklore is a joint exhibition by two intriguing, London based artists both called Ben who also share an interest in Folk Art and ‘primitive’ art forms. 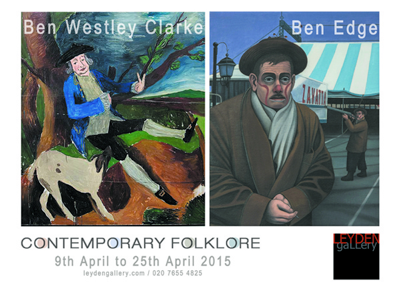 Ben Edge’s works are intimate and small scale. He focuses on portraits of unsung heroes which also contain a variety of symbols such as those in his The Missionary, the Explorer and the Inuit. The paintings are flat and have a realistic and surreal feel to them, yet with black outlines the work can feel cartoon-like.

Ben Westley Clarke’s art is on a larger, bolder scale, using figures of people he knows or those with a local story like Barbadian Drinker which refers to dwindling pubs and pub culture. With loose brushworks and textural paint application his art, although the opposite of Edge’s, also works to highlight their main topic: outsiders and Folk Art within the art scene and the wider environment. This leads to the, not particularly new yet still unresolved, discussion about ‘highbrow’ and ‘lowbrow’ art.

The similarities of the artists were unknown by the curator who came up with the concept for this exhibition. Although their styles differ even they were a little surprised to find out they had more in common than expected – such as mutual interest in music making, and mutual acquaintances as well as their fascination with Folk Art.

Their interest in music led them to have live performances AKA a Music Happening on 14th April in which both artists performed alongside other participants. There was an operatic act, Suhee Kim, Junelle Kwon and Soon-Hak Kwon, who sang a piece of poetry, Flower, written by Kim Chun-su. Each note was translated into braille; this piece was then performed in Korean.