Just when you think you have seen everything in contemporary art someone turns up and vomits on a canvas. The artist is Millie Brown and her first UK exhibition Muted Chronology at The Strand Gallery opens today, following previous collaborations with musician/performer Lady Gaga, and designer Nick Knight. 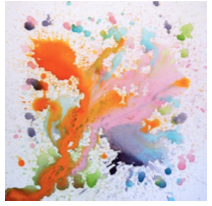 The Strand Gallery will exhibit an on-site video installation (showing a series of Brown’s films and collaborations) and a large work on canvas. The majority of Brown’s current work involves drinking coloured milk and regurgitating the liquid over canvas or white clothing while recording the process. The resulting films are highly stylised, considered and choreographed and Brown uses anticipation, intrigue and fear to create a viewing experience which is compulsorily voyeuristic.

The corporeality of the scenes directly confront issues of the body, human nature and gender by drawing on current issues and ancient symbolism. Critics have noted the abstract beauty of the finished canvases.

Brown has collaborated with designer Nick Knight and music director Ruth Hogben and her work is celebrated by global phenomenon Lady Gaga. Gaga personally chose Millie Brown to feature in her own performance video: Brown vomits shimmering liquid over the singer in an experiential and grotesque pop music video.

Alongside the video installation, one of Brown’s unique vomit-art canvases will be available for purchase; making this exhibition a one-time opportunity to invest in this hotly tipped artist.