The advantage of travelling with a foreign-owned company like MyFerryLink is that the We’re-abroad! atmosphere begins as soon as you get onboard. I don’t mean that the toilets are holes in the ground and everyone pretends not to speak English. Rather everything’s subtly Frenchified. You can tell by the signs, the stock in the vending machines and of course the food. We travelled to Calais on an evening crossing and supped on board. The steak was appealing – but always remember that rare, medium and well done have different meanings in the Francophone world. 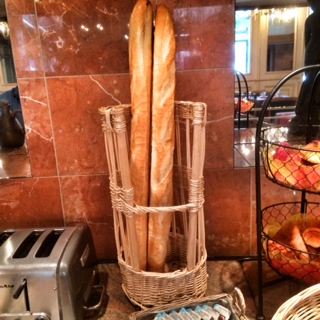 Having stayed at the Hôtel d’Angleterre I now want a baguette basket.

The next day’s breakfast at the Hôtel d’Angleterre in Arras was the usual tempting buffet, sitting quietly at the side of the room, saying nothing but irresistibly drawing you over for seconds. And thirds. Managing to avoid the pains au chocolate and croissants I took the opportunity to boil a couple of eggs, it being so much more satisfying to cook your own breakfast. Unfortunately water appears to boil at a higher temperature in France. Either that or I misjudged the length of time the eggs were submerged. Either way I served myself and a friend less of a nutritious repast and more of a tepid, egg-flavoured drink.

Luckily someone else was cooking lunch.

That someone was the chef at the Estaminet L’Ermitage, near the Maison Forestiere unintentionally made famous by Wilfred Owen. Here you can be reminded just how close the Belgian border is by enjoying the local carbonade flamande. A stew slow-cooked in brown beer gives soft, melty meat and a sweet, almost dessert taste from the pain d’épice added to it as it cooks. It was enjoyable country fare, ideal if you’ve just tackled the 7KM Wilfred Owen trail. Like most estaminet, meat-eaters are well catered for. Vegetarians get less choice. French Estaminets aren’t really designed for new-fangled diets like vegetarianism – which have only been around since 500BC. If you’re the sort of vegetarian that eats fish then you should be OK. If you’re the sort of vegetarian that is a vegetarian, you might want to have a big breakfast. 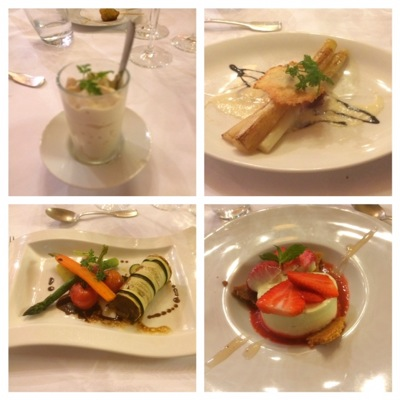 Dinner was at the refined Restaurant La Faisanderie on the Grand Place de Arras. The whole square was destroyed during WW1 and has since been rebuilt in the original Flemish Baroque style. La Faisanderie is the sort of place where you look at the menu and think I’m going to come out of here very full. And then look at the number of wine glasses in front of you and think I’m also going to come out of here very drunk. The delightfully presented dishes were announced in French by a waiter who sounded as though he had announced them once too often. The emulsion de langoustine looked benign but was as strongly flavoured as it was lightly whipped. Delicious though was the Agneau de Printemps en Cannelloni de Courgettes which is how I would always like to have my lamb served from now on. About the pale, lightly scented pistachio parfait which finished proceedings, I will just say that that I intended to have a small taste, and accidentally ate almost the whole thing.

The next day breakfast tempted once again. I had more success with the eggs, although no one took me up on my offer of cooking one for them. We lunched at the Estaminet de Lorette near to the French memorial at Notre Dame de Lorette. Peahens wandered the grounds outside, causing confusion as what the pintade aux poires on the menu actually was. They were a decoy though, it definitely was guinea fowl and not peacock. It was followed by the local delicacy – sugar pie. 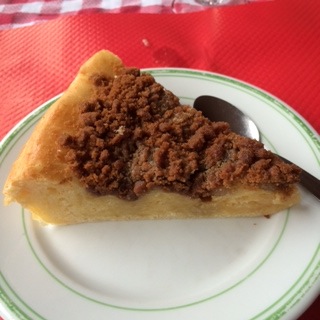 As with all things French, it has a much more tasty sounding local name. But even calling it tarte aux sucre doesn’t get away from the fact that its main ingredient is sugar. You might think it would be too sweet and you’d be right, although the thick layer of demerara adds a slightly darker sweetness to the overall sweetness, as well as a rather nice crunchy sweetness. It’s all too much to be delicious though, and the name is too honest. Tarte aux sucre just rubs in the unhealthiness and makes it less appetising. (Doughnuts are nice, but would you eat quite so many if they were called Deep-fried sugary fat-balls?)

And so, a short weekend spent in France, a lot of French food eaten. Some I’d eat again. Some I’d live on. Others I’d avoid. But as always you’ve got to hand it to the French, they know how to eat.

MyFerryLink operates 16 daily crossings on the Dover-Calais route. Fares for a car and up to four passengers start from just £36 each way online for any duration travel and from £29 return for a day trip. To find the best fares, visit www.myferrylink.com or call 0844 2482 100

A double room at the Hôtel d’Angleterre in Arras starts from €104 per night on a bed and breakfast basis. www.hotelangleterre.info