Artists, pro-choice activists, London-based but with Irish women’s rights in their hearts. Let’s discover what Speaking of I.M.E.L.D.A is and why it is important to sustain its work. 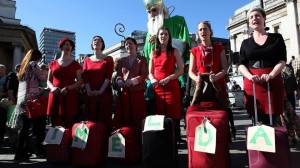 Alessandra Cianetti: As a feminist performance activist group you chose Speaking of I.M.E.L.D.A. as a name. What is I.M.E.L.D.A? Why do you want to speak about it?

Speaking of I.M.E.L.D.A.: We use I.M.E.L.D.A. as an acronym to mean – Ireland Making England the Legal Destination for Abortion.  I.M.E.L.D.A. was originally used as a code-name by the Irish Women’s Abortion Support Group, a group of activists based in London who provided support to women travelling from Ireland to England for abortions between 1980 and 2000. The code-name was especially necessary between 1986 and 1995 when the Information Cases in the Republic of Ireland made it a criminal offence to travel abroad for an abortion and to provide information and referrals for abortion services. During these 9 years, approximately 6,000 women from Ireland, North and South, still travelled to England for an abortion. The I.M.E.L.D.A. code name enabled these women to keep their plans secret to avoid legal action being taken against them.

In 1995, giving information about abortion abroad and travelling for an abortion again became legal activities. However, since then an average of 12 women a day have continued to travel from Ireland, North and South, to England for abortions. Apart from the considerable expense and stress of having to travel abroad for a medical procedure, these women are often denied follow-up after-care. In addition, in 2013, the Republic of Ireland implemented a 14-year prison sentence for women who have abortions in Ireland illegally. This has dire consequences for women who take pro-abortive medication because they cannot afford to travel or are not permitted to leave the country.

In speaking the name I.M.E.L.D.A. we wish to act in solidarity with those who seek to counteract the inhumanity of state legislation, which denies women the right to choose what happens to their own bodies and in their own lives. In addition, the ‘Speaking of’ in our title highlights our intent to develop discourses around the plight faced by women in Ireland, issuing a call to speak up and speak out against the draconian patriarchal ideologies that continue to impact negatively on women’s lives and reproductive rights.

AC: I have been attending some of your meetings and I was amazed by the degree of integration and collaboration between contemporary live artists and the older generation of women involved in the LIFN (London Irish Feminist Network) and have been active since the Seventies. How does this relationship influence your interventions as live artists and activists?

Speaking of I.M.E.L.D.A.: It is fantastic that I.M.E.L.D.A. is an intergenerational collective. Women who are active in London Irish Women’s Feminist Network and previously the Irish Women’s Abortion Support Group are part of the group and it is absolutely wonderful to learn from their experiences and knowledge of activism throughout the years. At the same time, the older women are thrilled that there is a younger generation of women interested in continuing the struggle.  The young women attract the attention of the new migrant Irish and of the second generation Irish who grew up in Britain.  The wide age spectrum emphasises that the issue of 12 women a day is neither a new problem nor one that only affects young women.  The presence of the older women changes the aesthetics and acts against any tendency to see the protests as being those of the young. It also stops older Irish people from dismissing the audaciousness of the challenges we make as just youthful brashness.

However, it is simultaneously disheartening and encouraging that our collective is intergenerational. Disheartening because it means that Ireland’s anti-choice laws have spanned several decades, but also massively encouraging because of the intergenerational solidarity we feel regarding the need to speak of I.M.E.L.D.A. Because we can support and encourage each other across the generations, it enables our collective to stand stronger in the face of any backlash from the anti-choice lobby and this solidarity spurs us to even work harder to increase awareness of the hypocrisy of Ireland’s anti-choice laws. Within the group we all pull together to input into the direction of the group and work on the development of performance actions, press releases, filming our actions, alongside maintaining our presence on social media such as Twitter and Facebook. 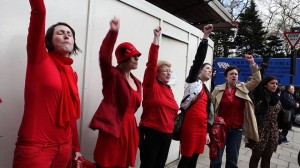 AC: Speaking of I.M.E.L.D.A. supports international pro-choice groups such as the Spanish movement My Belly is Mine. How has this network been formed? What kind of support do you provide to other groups?

Speaking of I.M.E.L.D.A.: The link with My Belly Is Mine was developed when some of us, by chance, met My Belly Is Mine members in various London-based feminist groups. There was an instant and mutual realization of how closely related our causes were and how beneficial it would be to support each other in achieving our respective aims. It’s interesting that this Irish-Spanish pro-choice link is also an inter-generational phenomenon, since in 1980’s London, the Irish Women’s Abortion Support Group also worked closely with the Spanish Women’s Abortion Support Group in supporting women coming from their respective countries to access an abortion in the UK.

Both Irish and Spanish pro-choice activists are very much aware of the current anti-choice tendencies that appear to be spreading across Europe (with Cameron’s appointment of an anti-choice Minister for Women being one possible indication of this). So, there is strong feeling that we’re all in this together, and members from Speaking of I.M.E.L.D.A. and My Belly Is Mine regularly confer to advise and support each other. To date, we’ve attended some of each other’s pro-choice actions and we also support each other on social media and in publicizing our respective actions.

AC: March 2014 has seen the first interventions of your group in two Irish gatherings. One in a meeting addressing catholic issues and one at the St Patrick’s Day parade. Photos and videos of these actions are great and your interventions are at the same time political, rapid, deep and fun. Please, tell us more about these first two actions and what you did.

Speaking of I.M.E.L.D.A.: Our first action was on International Women’s day on 8 April  2014 – a fitting day for Speaking of I.M.E.L.D.A.‘s debut.  We intervened in a conference at the Camden Irish Centre. This conference was titled “Dissonant Voices: Faith and the Irish Diaspora”. It was led by a group of Catholic clerics who describe themselves as ‘radical,’ as well as ‘politically and socially engaged.’ Dressed in red and pulling suitcases, we interrupted the conference to demand that this ‘radical and socially engaged Irish church’ listen to the actual needs of Irish women and cease lobbying politicians to restrict women’s reproductive rights.

This intervention felt important for us to undertake, because the attendees described themselves as ‘radical’ and so we thought they might be more open to engaging with the need for full reproductive health rights for women in Ireland. And indeed, the varying reactions of attendees (as shown in the video of the intervention) showed us that we did succeed in provoking others to engage with the reality of I.M.E.L.D.A. and different possible attitudes towards women’s reproductive health rights.

Our next action took place on March 16th when we intervened during the St Patrick’s Day celebrations in London. Using performance and dialogue, we aimed to raise awareness among parade spectators regarding the ongoing problem of I.M.E.L.D.A. Dressed in red and pulling suitcases, we succeeded in (unofficially) opening the parade itself by speaking of I.M.E.L.D.A. to the thousands of spectators who were waiting for the parade to begin.

Another action we did took place on 8th April at the beginning of the President of the Irish Republic’s state visit celebrating improved relations between Ireland and Britain, we performed outside the Irish embassy in London. Dressed in red, singing a version of Irish singer Enya’s  ‘Sail Away’ and waving a shimmering red cloth representing the Irish Sea, we aimed to highlight a much less-publicised facet of Irish-British relations: the 12 women a day who are forced to travel to England for an abortion because this choice is denied to them in Ireland. During the performance, some women were banished under the ‘sea’, symbolizing the powerful hypocrisy of Ireland’s anti-choice laws and their cruel disregard for, and neglect of, the reproductive health of women in Ireland. We were heartened that President Higgans acknowledged our presence by waving when departing the Irish Embassy.

This was quite a challenging action for us to take, since there was high security for the President’s State Visit and we received some backlash from those who thought that it wasn’t the appropriate time to speak of I.M.E.L.D.A. However, we will continue to speak of I.M.E.L.D.A. until the denial of reproductive health rights to women in Ireland is no longer ignored or dismissed as ‘not important right now’.

Subsequently, during the state visit we made an intervention outside the Royal Albert Hall when members of the Irish community in Britain were congregating to attend a concert “Ceiliúradh” (Celebration). 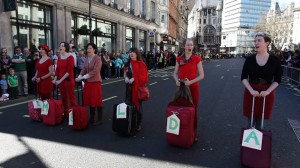 AC: On 25th April the Live Art Development Agency hosted a free Wikipedia edit-a-thon as part of its Restock Rethink  Reflect Three. Attendants were asked to fill Wikipedia will all the entries it lacks in terms of feminism and live art. What entries would you suggest?

Speaking of I.M.E.L.D.A.: Actually one of our members attended this fantastic event and found it to be a hugely informative and enjoyable experience. It was also very empowering to be part of a collective environment focussed on developing feminist histories and making space for feminist artists.  She suggested a number of live art practitioners related to or resident within the Irish region including: Kira O’ Reilly, Anne Seagrave, Sinéad O’Donnell, Amanda Coogan, Áine Phillips, Pauline Cummins, Aideen Barry, Frances Mezzetti, Ann Maria Healy, Chrissie Cadman, Áine O’Dwyer, Michelle Browne, Elvira Santa Maria Torres and Anne Quail – a list that is by no means exhaustive. Other attendees at the event also suggested some of these artists and it was great to have discussions about their work and indeed, the broad range of artists that were highlighted throughout the day.

It was also wonderful, Alessandra, that you suggested Speaking of I.M.E.L.D.A. as an entry and that the actions undertaken by the group were also discussed at the Long Table on Live Art and Feminism that followed the edit-a-thon.

AC: Most of you are performers with their own body of work. How does the relationship between artistic practice and activism work within your group? How much does your involvement in Speaking of I.M.E.L.D.A. impact your individual practices?

Speaking of I.M.E.L.D.A.: There are many creative practitioners involved in I.M.E.L.D.A, including from the fields of live art, music, film and theatre. The creative energies within I.M.E.L.D.A., of course, feed and influence our development of public performance actions and the aesthetics we deploy. Equally, the creative strategies used by members of I.M.E.L.D.A. who were actively involved with campaigning around this issue throughout the 1980s are also hugely relevant and informative to what we do. In this sense there is a huge crossover between artistic practice and activism within the group.

Importantly, the feminist politics that inform our individual practices and broader political activism crucially influences what we hope to achieve with I.M.E.L.D.A. We see ourselves as operating in solidarity with movements centred on achieving equality, for example, the Occupy movement and campaigns for LGBTQ rights. Indeed, in terms of activist practice, the working together across different sexual orientations on this issue is an important form of solidarity that recognises a woman’s right to a self-defined sexuality. In the Irish feminist activism in London in the 1980s, that alliance across sexuality was always strong. In fact, British women who identified as lesbians were routinely involved in campaigns on issues such as the conditions in which women republican prisoners were held.

AC: Speaking of…the future: is there any coming event/meeting you can share with us? 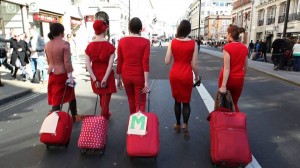 photos by Speaking of I.M.E.L.D.A.