The first cars in the 2013 Mille Miglia had only reached Ferrara around 00.30 on Thursday evening, having left Brescia and passed through some of the breathtaking towns around Lake Garda. The drivers of the open cars had got a soaking, but they still paraded through Verona’s Arena and many fans braved the inclement weather to get a glimpse of the vintage cars as they completed the first stage of the race. 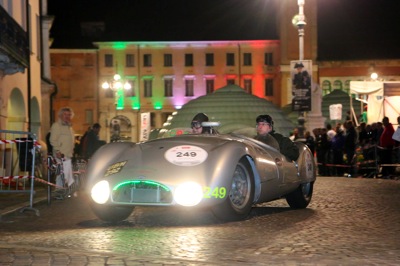 However it was an earlier start for the drivers than the day before as the race to Rome began at 7.45am on Friday morning. Today’s route went through Emilia Romagna, Tuscany, Umbria and Lazio where thousands of spectators would see the passage of this unique traveling museum. The morning saw the cars take the breathtaking drive around the roads of Mount Titano and the Republic of San Marino

German actress Hannah Herzsprung, the co-driver of a Jaguar C-Type said this was the best moment of the race so far. ‘It was amazing to go through those streets and the countryside between Romagna and Tuscany, on the road towards Sansepolcro. Despite the rain…I’m glad to be here, above all for the warmth of the people.’ However previous winner Giuliano Cane said that ‘Without a doubt, the passage through San Marino has been the most challenging one so far – especially because we had to stick to a very steep and tortuous part of the route.’ Car #1, the OM 665 SS from 1930 actually had to stop and let the engine cool down as the road was so steep! 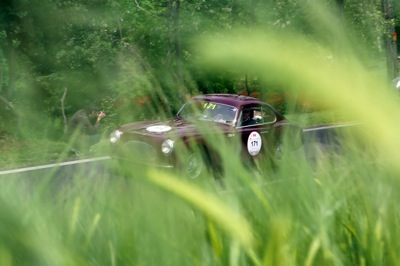 The Mille Miglia is about taking part and coaxing the machinery to the end of the course. However it is also a regularity race, with points scored everyday and Argentinian driver, Juan Tonconogy in his 1927 Bugatti T40, was in the lead after the first regularity trials. He maintained his lead ahead of Giordano Mozzi in a 1933 Alfa Romeo Grand Sport and Giovanni Moceri in his 1933 Aston Martin Le Mans.

Friday was a  hectic day for the crews who faced four regularity trials: San Marino, Pieve Santo Stefano in the Province of Arezzo, Province Umbertide in the Province of Perugia and Arrone, in the Province of Terni. Regularity trials require cars to race along a segment of a route – normally either closed or distant from traffic – maintaining a target pace. For example, a Regularity Stage of 3km could have a given time of three minutes and thirty seconds. For every hundredth of a second error, above or below the precise “target” time, the competitor receives a penalty.

This phase of the race led the cars through some of the most fascinating and beautiful Italian landscapes. One town that stood out was Gambettola, for its extraordinary welcome. 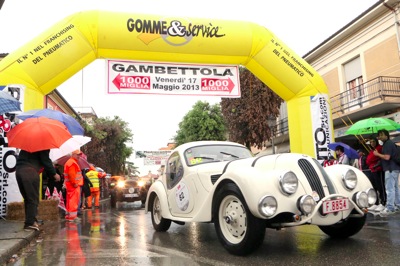 The Mille Miglia has visited Gambettola for almost twenty years and the reception is fantastic. Each crew is received with the laughter, waving and an abundance of treats. These include a basket of fresh strawberries that the farmers’ cooperatives provide for every crewmember.

After Emilia, the Mille Miglia route wound through the splendid hills of Tuscany and scenic Umbria. It then continued towards the picturesque landscapes of Sansepolcro, Assisi and Spoleto before arriving in Rome along the Via Flaminia Nuova at around 8.30pm. At the Castel Sant’Angelo the cars were presented to a great throng of spectators. The rarest cars were displayed on the podium today, including the Mercedes-Benz 300 SLR driven by David Coulthard. This car, which took part in the 1955 edition was driven by to Juan Manuel Fangio, winner of five Formula One titles. It is perhaps the most beautiful vehicle ever produced by Mercedes- Benz. Ferrari’s 375 MM Berlinetta Pininfarina followed, which was built in 1954 and commissioned by film director Roberto Rossellini as a gift to his wife, actress Ingrid Bergman. 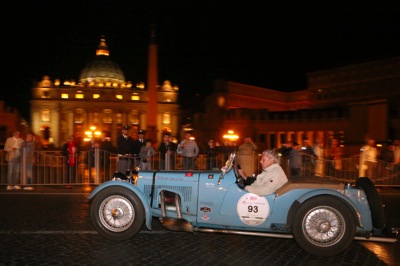 After reaching Rome the Mille Miglia cars toured the centre of the Eternal City, passing through some of the most beautiful corners of the Italian capital, including the Circus Maximus, the Colosseum, Piazza Venezia and Via Veneto. Then the drivers got a few hours sleep before departing for the final day’s drive back to Brescia at a rather early 6.15am.

More information about the Mille Miglia