An evening curled up by the fire with a well-thumbed copy of Chaucer is some people’s idea of bliss. I have to admit I am not one of them. I do have a copy of the Canterbury Tales, but if you asked to borrow it it would take a while to find. Nevertheless I thought I was safe to go to this talk by Simon Horobin. The Hay Festival programme claimed that the Oxford professor assumed no previous linguistic knowledge or familiarity with Middle English. Which described my knowledge and familiarity perfectly. 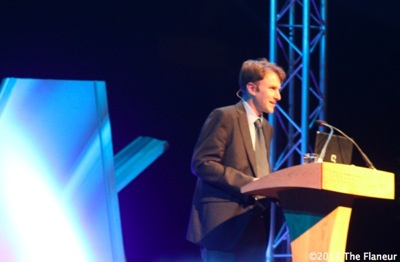 Recently the fellow of Magdalen College has been looking at spelling, his latest book asking Does Spelling Matter?

. He is an expert on all things Chaucerian and here he introduced the audience to Chaucer’s language and examined the poet’s influence on English. Anyone who delights in language would have enjoyed the Middle English words that popped up in the poetic quotations – drasty and gallimaufry* being among my favourites. Horobin announced that ‘Twitter’ can be found in Chaucer, as can Blackberrying. The poet was centuries ahead of his time – and he is even tweeting today. Follow @LeVostreGC on Twitter for his views on modern life, including observations such as We neede fewer starte-uppes and moore uppe-startes.

The Barclays’ Pavilion at the Hay Festival was the location for this morning lecture. The stage had an expressionist design with a more-sculptural-than-comfy looking chair in the centre, next to a low table and microphone. I installed myself towards the front in a marvellous position from where I would have a perfect view. Except that when Horobin walked on he started speaking from a lectern that I hadn’t noticed to the right of the stage. Wearing a Britney microphone he introduced his subject, quoting Lydgate who had referred to Chaucer as ‘Golden drops of rhetorical eloquence.’

Chaucer has been championed as the man who protected Our Wonderful English from being overrun by Norman French. However Horobin made the point that by the 14th century French was already dying out as a spoken language. Loan words from French were used, as now, to give a sentence a certain je ne sais quoi, and make the writer look très intelligent.  But Chaucer didn’t have to fight against a tide of linguistic Frenchification.  English was the living language that was used every day, even by those who had come over with William The Bastard before he made the understandable name change to Mr. The Conqueror.

So if Chaucer didn’t stop English disappearing, what was his contribution and why is he known as the Father of English poetry? Horobin explained some of Chaucer’s innovations. He mixed different styles of language in a way that had not been seen before. He introduced technical words from unusual places. He coined new words.  He introduced words like a thurrok meaning the hold of a ship from his own area of expertise of wool taxation and customs. He created words such as goosish to describe someone gooselike or naive. He compounded words and was unafraid to mix and match words from different levels of society or linguistic registers.

Chaucer’s important contribution to English style was the richness and density of his language. This is lost when words are translated into modern English. Much of the punning and wordplay disappears. For the Chaucer beginner,  Horobin suggests, start with the Miller’s tale, get a good edition with translations on the same page, as there will be a lot of words you do not know and just get stuck in. I’ve been inspired to dig out my copy and set to work.

*In case you weren’t sure, drasty means filthy or worthless and gallimaufry means a confused jumble. I will be trying to use both as often as possible from now on.

Get yourself a copy of Chaucer and start studying today:The Riverside Chaucer: Reissued with a new foreword by Christopher Cannon