Brunch. The very word makes grown men sigh with memories so overwhelming they have to sit down to recover.

In the beginning there was breakfast, lunch and dinner. The three Square Meals. For centuries the populace put up with this tri-partite division of calorie-input without complaint. Sure they’re classics, sure we love them in their own way. There’s nothing wrong with them – at the right time there can be nothing better.  Even the excesses of the ages of Caligula, Louis XIV or Charles II didn’t include the discovery of brunch. But sometime, somewhere a genius made the amazing discovery that there was a meal lurking between luncheon and dinner.

Who was this man? Was he a woman? How did it happen?

For my doctorate thesis I have been studying the origins of brunch and trying to discern fact from myth. It has been a long and arduous journey, with much studying of 17th century pamphlets. Most important developments are named after the person who discovered them. For example Louis Pasteur gave us Pasteurised milk, Dr Martens gave us Dr Martens and Candido Jacuzzi gave us the Jacuzzi. By this theory our investigations should centre on a Mr (or Mrs) Brunch.

Brunch is not a common name in England, but it is in the German province of Bavaria.  It was here that my research proved most fruitful, as I discovered a Herr Brunch who was renowned as ‘Ye gentleman with ye largest of appetites in Olde Bavaria, who once ate a horse and wasn’t full.’ Only one image of Herr Brunch has survived.

Of course reactionary Pamphleteers rose up in condemnation of this new meal and records show Herr Brunch soon embarking for Philadelphia, which makes sense as Brunch has really reached its zenith in the Eastern USA. Several documents prove that it was his discovery of the existence of Brunch that was the direct reason for Herr Brunch’s emigration. Persecution of such forward-thinkers was endemic in Europe at that time and careful analysis of timelines suggest that Herr Brunch’s revolution in 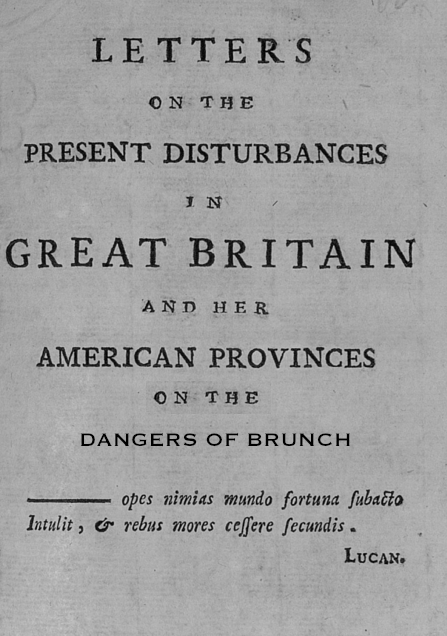 mealtimes may have been the real cause of much of the European emigration to the Americas.

Brunch: The real cause of the American revolution?

Having studied many different pamphlets it has become clear that it was arguments over brunch that were the final straw for the American colonists. It would not be putting too fine a point on it to say that the attempted suppression of brunch by the British caused the first uprising in the American colonies. This has since been attributed to taxes and tea, but the earliest records suggest that the King’s representatives had brought a law stating that a man could not eat brunch on a Sunday. ‘The King hereby states that the only meals of the day that are allowed to be eaten are breakfast, lunch and dinner.’ This caused great anxiety, and several documents show that the British did relent and allow the eating of elevenses at 11.00am, but this was restricted to one cup of tea or coffee and a biscuit – a tradition that has continued in the United Kingdom until this day. A cup of tea and a biscuit was not enough for men used to enjoying omelettes, gin fizz, pheasant, ham, cheeses, champagne, port, as well as tea and biscuits.

Brunch has reached a state of near-perfection in 21st century United States. Some brunches can take several hours to consume, involving as they do any or all of the following: Pastries, yoghurts, fruit, bread, eggs, waffles, cream, omelettes, cereal, oatmeal, bacon, coffee, alcohol, tea, milk. If you are in Philadelphia and wish to sample the delights of Herr Brunch’s discovery you can do worse than slip along on Sundays to the Sofitel hotel and enjoy the delights on offer. Chef George cooks up delicious waffles from a 1937 recipe that is so moreish you will find it hard to leave the restaurant. Enjoy!

2 Comments on Brunch: Who discovered this important meal and did it cause the American Revolution?