The Ferrari Tribute to Mille Miglia is a re-enactment for Prancing Horse owners of the world’s most famous endurance road race. The drivers aboard post-1957 Ferraris paraded their cars down Brescia’s Viale Venezia to open the 2013 edition of the historic event. The competitors then continued along some of Italy’s most beautiful roads, following the traditional route to Rome and back to cross the finish-line at Brescia on the night of Saturday, May 18th. 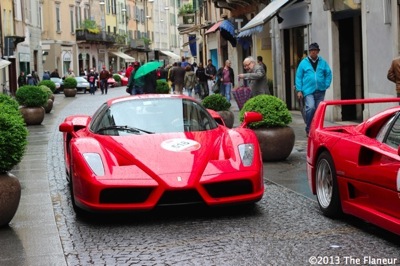 The Ferraris taking part came from more than twenty different nations and were divided into two separate categories: Classic for cars built between 1958 and 1984, and those built between 1984 and the present. The cars represent a marvellous compendium of Ferrari’s extraordinary production from every era and were selected by a special committee chaired by Ferrari’s Vice Chairman, Piero Ferrari. 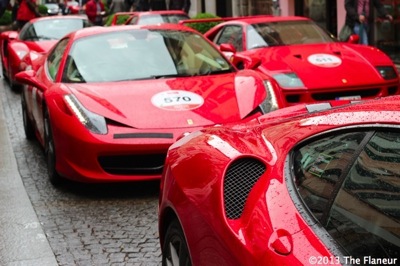 The Ferrari Tribute to 1000 Miglia followed exactly the same 1500km route as the main race, starting from Brescia, with regularity trial stages in Desenzano del Garda, the Autodromo di Imola, Rome, Florence and the Fiorano Circuit before finishing back at Brescia once more. 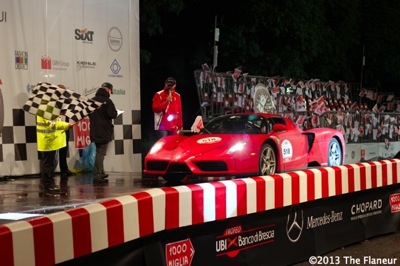 The Ferrari Tribute to 1000 Miglia cars left a few minutes ahead of their historic counterparts. They drove through Assisi, Sienna and Florence to name but a few of the towns that provided stunning backdrops to this year’s Ferrari Tribute. The thousands of enthusiasts that thronged the route were provided with an absolutely unmissable spectacle.