Holy fuck! He’s carrying a wooden stake and gesticulation savagely as he  runs past us, down the alley and vanishes into a  maze of  tower blocks. We are not queuing to see this show. This piece of  unexpected ‘street theatre’ is real…too real! And we are desperate not to become ‘immersed’ in it.

Now, don’t get me wrong. I like to ‘keep it real’. But as T S Elliot once remarked ‘ mankind can only take so much reality’, and as I can see someone approaching with a ‘real’ knife, I defiantly feel as if I reaching my quota for the evening.  You see , the  part of  Hoxton that  we are in, has thus far, resisted the hipsters. It harks back to another era when the ‘old bill’ would only do the Hoxton beat in three’s – or so the locals tell me.We just want get out of this alleyway and into a derelict shop, 297 Hoxton Street, to see an  innovative version of Shakespeare’s  The Tempest, Part 1, by Retz  Theatre Company,  who are specialist in immersions of an unreal kind.

Anyway, the knife man still commeth- but at that moment, a tall friendly actor, with a cod Russian accent dressed in the uniform of a soviet  block  border guard, finally opens the steel plated door at the back of the shop; and we escape into the ‘ brave new world’,  or the Republic of ‘Borduria’ created specifically by Retz to present ‘The Tempest’ part 1 of 6. 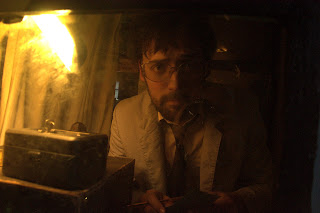 and the one we did…

Like anxious tourists, we  present our passports to be stamped by an intellectual looking young man in a cubby hole, before entering a lift that whisks us (you have to pretend) to the lobby of the ‘Claribel Hotel’. An eerie replica of a 1930’s Hotel, with dark undertones of Moscow’s, infamous, Lybinka where the  Bolshevicks  tortured the  soul out of the Russian intelligentsia.

It is very dimly light and there’s a disconcerting smell of  rotting newspapers. As your eyes adjust to the light, you begin to take in the details:  a life-size, social realist, portrait of a Lenin like figure, looking down on tattered sofas and coffee tables. A  green 1930’s lamp shade faintly illuminating a drinks decanter and the debris of a make shift bar which also seems to double as the reception.

It’s a kind of  literary hell. The inspiration for the set of many a film noir or American Gothic movie.  The audience sits or stands where they can, among besuited men who are frozen in various poses, like stuffed animals in a taxidermists shop window. Two loafers at a table play dominoes and an older bearded man stares into the distance, his face flickering under the light of black and white tv screens.

And then they begin to speak in that strange, unfamiliar, devilish sound of Shakespeare’s, which only adds to the dissonance of this weird tale of shipwreck, treachery and magic, like some dark intrigue played out in a pub lock-in. Prospero is the unseen ‘landlord’ of this dark island, manipulating  the shipwrecks until they are slowly driven mad by the hauntings they are forced to endure.

Then at the end of the first act, its suddenly over. The shutter’s at the front of the shop are pulled up and the mellow evening light seeps in through netted curtains at the front end and sweeps away the ghostly world of the Clariabal Hotel.

So what exactly had we witnessed? Was it a vision of The Tempest or a dark theatrical interlude, a Pinteresque experiment in atmosphere and style? Both, I suppose. The pleasure for me was the investment made, by the company in the make believe; the attention to detail and their total commitment in creating an experience for the sake of the audience was inspiring. To be continued …..