The Capitolium in Brescia is at the foot of the Cidneo hill and is part of the remains of the old Roman town of Brixia. It was the main temple where Romans worshipped Jupiter, Juno and Minerva. The ruins were partially rebuilt in 1823 and the facade now stands impressively on Via dei Musei. 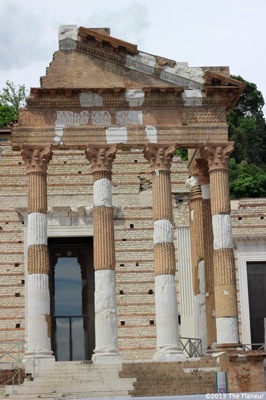 All this you can see from the street. It gave the sense of more excitements inside and I walked up to the gate ready to step back in time -only to be told that you could only view the Capitolium by guided tour, which had to be booked at the Santa Giulia museum. This I did, and then missed the tour after getting waylaid by the marvels of Santa Giulia. So I returned the next day, full of Roman-ruins-excitement, wondering just what was hidden there that needed a guided tour. The remains that were visible from the street could be inspected in about five minutes, yet the tour was going to last fifty minutes. No doubt there were all sorts of finds from ancient times on which to feast the eye. The guide would explain everything and I would come out an expert on the Brescia Capitolium, at least for a few hours before I forgot it all again.

With five minutes until the tour started there were only three of us hanging around the entrance. The signs were in English and Italian, which I thought boded well for the tour. ‘In this area of the site part of a 1st century BC sanctuary survives’, said one sign. ‘This sanctuary with frescoes of exceptional quality has been known since the 1800s.’ Not to me it hasn’t, but it sounded interesting. Maybe the frescoes were so delicate that guided tours of three people were all they could cope with. I like a good fresco and was looking forward to the tour. Then I read the rest of the sign, which unfortunately said, ‘The opening of this unique and highly important space to the public will constitute the final phase of the current project.’

Oh well. Brescia has only recently been added to the UNESCO World Heritage List and the restorations are ongoing.  Two other people turned up and the tour began. Silently we were led under the temple facade to a large black door (you can just see it at the right of the photo above). Inside was a large table on which sat a white model of the town as it had existed 2000 years ago. There were also two white screens on both sides of the room and one directly ahead.

The guide picked up a Playstation controller at the far side of the model and pressed a few buttons. Then the lights went out and we were subjected to a son et lumiere performance. Different parts of the model were lit up from overhead, the screen in front showed billowing clouds, whilst the sidewalls showed projections of shadowy figures walking slowly towards the end of the room. Sometimes there were Italian explanations, but mostly it was eerie sounds and peculiar noises.

Eventually the guide walked back to the front of the table and picked up the controller. The end was in sight? No. He merely started a new projection in which a shadowy ceremony was played out in silence on the sidewalls.

In all this experience lasted half an hour. During which I learned nothing and saw nothing Roman, except changing computer generated images. At one point the edges of the table were converted into touch screens, with options to find out about certain facets of the area. This was clever, but the room was dark, the noises and projections continued and no one showed much inclination to use a table like an ipad. A simple board of information would have been a lot more useful. Some chairs would have been appreciated as well.

Eventually it ended with a Bill Violaesque figure in water and the noise of the sea. Or so I thought. But no, there was still time for a planet to move gently across some flickering stars. Then it was over. The door opened and a new guide came in. He led us into the next room where the walls had been covered with inscriptions found in the area. This guide was clearly very knowledgeable and now there were signs in Italian and English explaining what was on view. 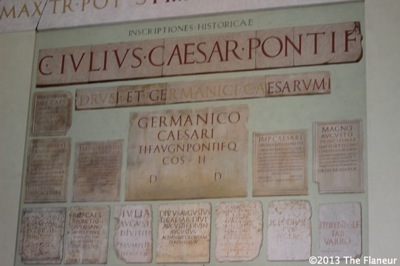 One more room had an ancient altar with some original polychrome marble tiles, along with three heads of statues that had been found nearby. There was a fence to lean on and we all lent on it as we learned that the heads were of Minerva and Silenus. Then we were led outside. This is where the tour really gets going, I thought. 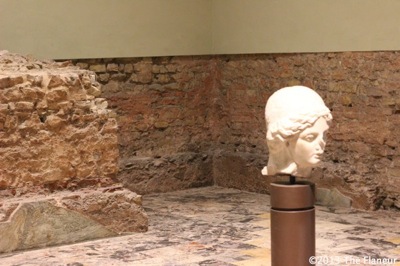 But that was the end.

You can see almost everything of interest in the Capitolium from the street. #JustSayin. I have since read that ‘the tour is introduced by a presentation of the long story of the area…a special atmosphere created by pictures and echoes…’ If you want a long story, special atmosphere and echoes then the Capitoliium tour is for you. Otherwise you would be better off visiting the nearby Santa Giulia Museum, where the history of the local area is more clearly laid out and not explained through the medium of flashing lights and dance.