Typical of a travel writer to beg, with pulverized platitudes of “get off the beaten track” nonsense but for the cynical British traveller in the US it’s not just important – it’s downright necessary! In the rural areas, or ‘boondocks’ of the US you don’t get the pretentious rich kids ‘finding themselves’ in ‘Ye Olde Europe’ or the wrinkled cruise barnacles invading port cities to the tune of ‘Oh my gosh Jeremiah that mans wearing dress, that’s outrageous give him a dollar’. You get real life Americans. Sweet, homely, fundamentally optimistic but with a dry sardonic wit. Yes you’ll hear them say ‘Merica often and they’ll crowbar the word ‘freedom’ into more sentences than seemingly possible but these are minor obstacles for we ‘realists’ to overcome in order to get to the beating heart of America –  and the result is rarely disappointing.

I’m lucky enough to work in a very nice school in Pennsylvania as part of a recurring Summer ESL programme so I recently spent most of 4th July preparing history lessons and dipping my toe in the bubbling pool of American patriotism. By this I mean I sat wide-eyed staring at a man clad head-to-toe in Star-Splangliness with a burger in my mouth. But the Americans I was with laughed it off with (almost) equal incredulity at ‘some Americans’. At lunchtime this spelled the beginning of a whirlwind of nostalgic triumph and flag-idolatry that I thought may push even my love and tolerance of Americans to the limit! However, I was asked if I wanted to watch the fireworks at Gettysburg (probably the only ‘famous’ American battleground known across the Atlantic) and the prospect of visiting a national monument, on a national holiday of monumental nationalism sent my geeky-culture-senses tingling into a squibbly fervour.

We set off on the 90minute journey across rolling hills of forest and Mennonite farms which seem to spread the length and breadth of this enormous state. 90 minutes, in ‘Alien’ (as we’re so endearingly called on our VISAs) terms would be a journey fit for sweet and drink rations and a prior ‘call to mum’ but to Americans 90 minutes is literally a jaunt up the road for a firework show. This is one of the major cultural differences nurtured by the gargantuan nature of the country and provides plentiful banter in the backseat. Once there, I suffered a colourful assault to the eyes. Stars and stripes everywhere, including a presence as the only support to many a bare white belly and the (much appreciated) covering of a bare white bottom in the form of oversized boxer-shorts on one particularly jubilant habitué. The flag-touting was not the only thing to jar my sensibilities though. Sober dancing, middle-aged talk of ‘potties’ and bearded baldies thrashing guitars to AC/DC were definitely at the cultural antipode to my own whereas things such as waiting in line to sit on bales of hay and, subsequently, be driven around by a tractor, firmly occupied the “eh?” category of confusion. 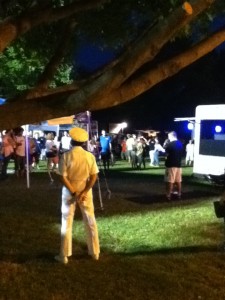 Around 9pm – just before the Summer sun went down, but long before she relinquished her control of the thermostat – a humbly dressed man stood at a microphone, surrounded by plenty of uniformed guests, and proceeded to read the entire Declaration of Independence to a small party of interested devotees. Around us I noticed that kids still played basketball, wives chatted and giggled and men conversed rebelliously in clusters between loud guffaws, just like anywhere else in the world. I was expecting bowed heads and sombre expressions but those were by far the minority and that was a welcome surprise. Not that the others lacked patriotism or shot hoops subversively, they just got on with their lives and didn’t let their pride stop them from enjoying what was meant to be a jubilant celebration of shaking off the shackles of oppression. I on the other hand was used to such care-free frolicking and chose to listen intently to a document which, by all intents and purposes, called me and my own out as a bunch of jolly horrid rotters who were being ousted from the party.

I stood, leaning on a tree and revelled in every word of the wonderfully written Jeffersonian rhetoric. This document born of, and suckled by the mother of The Enlightenment and fashioned by the skill of one of the greatest wordsmiths of the English language gave me waves of revelry. The Declaration is a catalogue of ambition and hope, enlightenment and reason, and although the US image has been sullied abroad I implore you to experience it yourself on their home turf, the effects can be quite contagious. At first, anyway. After the first few paragraphs my mind began to abscond. Rather than sharing in the jubilation of some of my fellow participants I began to feel sombre. The thought that such an idealistic experiment – which I adore – could have resulted in lobbyism and corruption to the highest degree could not be shaken from my countenance. In the coming months there will be yet another election in America, the first ‘title defence’ for Barack Obama who came to the main stage under an ostensible resurgence of the ideals of the enlightenment. His opposition in this new arena will be the sickeningly rich, annoyingly flippy-floppy Morman Mitt Romney. The very fact that he beat off other Republican nominees to be the other representative in a two-party system left me feeling dejected at the – predominantly Democrat – closing applause.

Flags were lowered and folded, bugles were sounded and packed away before the night crept on and we congregated around the amateur softball field with beers in hand. Sitting, watching fireworks light up the sky to the dulcet melody of a young group of girls – possibly sisters, definitely family – softly serenading the sitting celebrators with versions of Star Spangled Banner, America the Beautiful and Yankee Doodle, I was struck by a considerable change of mood since the reading of the Declaration. These sheep, these wronged protectorates shed their submissive clothes and donned the waistcoats and pantaloons of 18th Century enlightenment. They embodied the overly trodden terms of ‘Freedom’ and ‘Liberty’ by way of optimism and hope. No lobbyists were present in eyes squinting at the lights of fireworks, the cornucopia of corruption was refilled as snow cones and the warm Pennsylvanian air was a sanguine blanket of reverie the Founding Fathers must have felt themselves 236 years ago. And there I was sat right smack bang in the middle of it all. A Brit, a former coloniser and subject of eternal symbolic damnation every year on this day and I was welcomed in like a long-lost friend. Banter came in droves from friends and strangers alike as I enjoyed the festivities of America’s seemingly favourite holiday. Stephen Fry came to America with the purpose of making a documentary of the 50 States without simply poking fun at what they do or say differently. If you take this attitude when visiting any part of America then I bet – nay guarantee – your enjoyment of their humility, joviality and hospitality. Even as an ‘unnaturalized Alien.’