Sally Jack is a writer and poet based in Leicester. She has just completed a degree and during her time at university was the food columnist in The Demon newspaper. These are a selection of her recipes – aimed at students but suitable for all. Sally enjoys writing feature articles and fiction for children and grown ups, however, she also has a keen interest in poetry, art, theatre and local history. And food – cooking it, sharing it and writing about it.

My last post talked about going retro in the kitchen. I shall extend that idea further by considering how certain foods can magically transport you back to childhood. Sherbert Dips for me, sitting on the swings in the park. Or something we ended up calling The John Noakes  – the official name of the dish demonstrated eponymously on Blue Peter has disappeared into the mists of time, as the programme itself will soon be doing.

If I were to give myself the food equivalent of a hug one thing I would consider is a boiled egg and soldiers. I now find myself calling it a ‘dippy egg’ courtesy of my daughter but whatever you know it as, this is a classic food signifier of childhood.

The cooking colossus that is Delia (no surname required, although if it is, try ‘Smith’) ended up with egg on her face a few years ago following publication of her book How to Cook. She very helpfully detailed at some length the rudiments for boiling an egg, an act which insulted many of her loyal fans.  All I will say is I prefer boiling for three and a half minutes, I know people that like three minutes, others four. Hugh Fearnley-Whittingstall suggests a ‘soft hard-boiled egg’ at a whopping seven minutes (although admittedly, this is for Eggs Tartare).  Once your boiling time is up plunge the egg in cold water to stop the cooking process, plus it makes the egg easier to handle.

For some people a Chinese takeaway is a comfort food. I have been experimenting in the kitchen recently and would like to share the resulting recipe for home made egg fried rice – a brilliant way of using up leftover ingredients, no need to visit the Chinese and no ‘nasty chemicals’ either.

I like recipes that give plenty of options for adaptation and the following do just that. Throw in some frozen peas, or chop up a leftover spring onion, or stir fry some chicken or Quorn pieces, or sweetcorn or … I could go on. My second suggestion is a frittata – this is the Italian version of a Spanish omelette, or tortilla. I remember trying tortilla in a tapas bar in Barcelona one summer. A wet Wednesday in Britain may not have the same effect but on the plus side it can be eaten hot or cold and is another way of using up different things. This recipe, inspired by one I saw a few years ago in BBC Vegetarian Good Food magazine, is a twist on the original – it includes pasta instead of the usual sliced, cooked potatoes and is oven cook instead of frying and therefore healthier!

Finally, I must apologise to any vegans reading – I can recommend Marmite soldiers as an alternative to dippy egg, plus of course the fried rice can be done minus eggs if preferred. 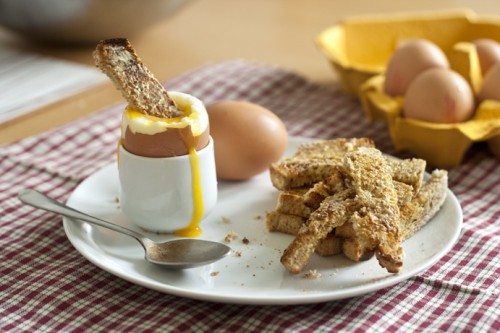 Special Home Made Egg Fried Rice – (a meal in itself)

– Rice (quantities according to packet instructions)

– 1 chicken breast or about half a packet of frozen Quorn chicken style pieces.

1. Cook rice according to packet instructions

2. Stir fry meant/Quorn in a wok or large saucepan until thoroughly cooked

4. Add rice and stir frequently for a minute or two to heat through

5. You can either break eggs directly into pan and stir round to ‘scramble’ with other ingredients or break into a separate bowl and beat first – then add to rice

6. Add a couple of tablespoons of soy sauce – whatever your taste really (I use the light soy sauce which isn’t as salty)

Oven Baked Frittata – another meal in itself

– 85g pasta such as macaroni

– Couple of handfuls of peas

– About 50g grated cheese or Parmesan

If you have any fresh or dried herbs, parsley or thyme would be nice but not essential. You could also include a courgette, or arrange sliced tomato on top before baking.

1. Pre-heat oven to 190C/Gas 5 and grease a large baking dish with oil

2. Cook pasta according to packet (about 8-10 minutes)

3. Add the remaining vegetables and cook for another 2-3 mins until pasta is cooked and veg have softened

4. Drain and put in baking dish

5. Beat eggs and milk together, add most of cheese, season and add herbs if using. Pour over veg and pasta, stir together. Sprinkle remaining cheese on top and bake for around 35 -40 minutes until set.